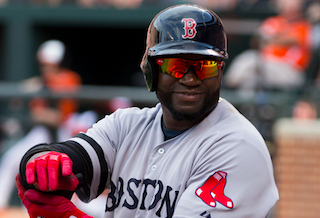 When David Ortiz speaks, his Red Sox teammates listen. That was the big takeaway from an ESPN report on last night’s Game 4 of the World Series, in which Boston tied-up the series 2-2 with the St. Louis Cardinals. According to ESPN’s Rick Reilly, it was a particularly powerful pep talk just before the sixth inning from the player better known as “Big Papi” that turned the game around.

Or outfielder Daniel Nava: “He kind of took us all into the corner of the dugout. I can’t repeat all the words he was using, but he just shook us up.”

And, most importantly, left fielder Jonny Gomes, who went on to hit a three-run homer to put the Sox on top: “It was like 24 kindergartners looking up at their teacher. That message was pretty powerful.”

But perhaps the most striking fact buried in Reilly’s piece is the inspiration for Ortiz’s inspiring rhetoric: Former President Bill Clinton. “Bill Clinton, he makes a lot of money making speeches,” Ortiz said. “And he changes a lot of lives with his speeches. I watch him. I learn. If you can get people to listen, they will react.”

He may have cited the 42nd president of the United States as his biggest rhetorical influence, but when Big Papi made his infamous speech during the first Red Sox game after the Boston Marathon bombing, he appeared to be channeling another famous Democratic politician: Joe Biden.

Watch that video below, via NESN: