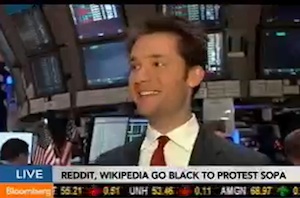 Following his somewhat contentious interview with Soledad O’Brien on CNN earlier this morning, Reddit co-founder Alexis Ohanian spoke with Bloomberg‘s Margaret Brennan on the floor of the New York Stock Exchange about his site shutting down to protest SOPA.

Brennan asked the internet entrepreneur why the blackout was still happening, despite Congress not pushing forward as hard as they were.

“I was supposed to testify down in DC today with a bunch of geeks, explaining why SOPA (Stop Online Piracy Act) as written was a terrible piece of legislation. Fortunately, the backlash has been so strong, so loud from the tech community, from the investor community, from Americans, that they backed off. The PROTECT IP Act (Preventing Real Online Threats to Economic Creativity and Theft of Intellectual Property Act) is still on the table, and we are across the country hosting protests. These are probably the geekiest protests ever — of tech workers, job creators going to our Senator’s offices, and actually right after this I’m going to head up to Shumer and Gillbrand’s offices in the city, and I have some sympathy cards for them mourning the loss of the Internet should they continue to sponsor and support these bills.”

“Just a little bit of background,” Brennan said. “This is Silicon Valley and Hollywood at war with each other here,” Brennan observed. “You’ve got groups like the MPAA head Chris Dodd out there saying that this blackout is a gimmick, a dangerous one, designed to punish elected and administration officials who are working diligently to protect American jobs from foreign criminals.” They are saying, ‘hey, we produce content, that they want to protect it and not lose money in the process.'”

“As a copyright holder myself, I also want to be protected, but these bills were written by lobbyists, not technologists,” Brennan countered. “$94 million dollars from Hollywood went into Washington last year, and it is frustrating in a time when we cannot get Representatives and Senators to agree on anything important, like the deficit or unemployment but someone shows up with $94 million and we have Democrats and Republicans lining up to co- sponsor the bill? That just seems wrong. I really want to start from scratch with technological experts at the table, not wiping out such an important part of the US economy.”