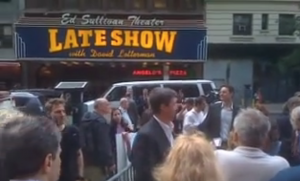 I have been involved in some strange circumstances in my often bizarre career, but this week’s retirement of David Letterman brings back mostly horrific memories of one of the dumbest things I ever did. I am referring to the time in 2009 when I flew from Los Angeles to New York to lead a disastrous protest of Letterman over his inappropriate jokes about Sarah Palin and her daughter.

As is often the case, it all came about because of a confluence of events which could never have been possibly been planned or even anticipated. I had just released a documentary film called “Media Malpractice” which “starred” Palin in the story of how the news media impacted the 2008 election. I had then gone on virtually every major TV talk show defending her.

On June 8, 2009, I started an ill-fated Los Angeles radio show (the station would suddenly change formats about four months later). On June 9, Palin agreed to appear on my show as a guest. That interview should have become very well known because in it Palin very clearly foreshadows her resignation as governor of Alaska (in response to a question I asked based on my instinct that something was very much amiss), but, typical of the way things tend to work in media, it did not.

As fate would have it, the night before our previously scheduled interview, David Letterman had made Palin the subject of his “Top Ten” list and had also made a very crude joke about one of her daughters. When I briefly spoke to Palin on the phone before we went on air it was clear that she had no idea that Letterman had even mentioned her (in my experience with public figures this type of thing is far more common than the general public would ever imagine and often plays a huge role in how events play out).

Because Palin hadn’t seen the comments, I didn’t push her too hard for a response, but she did give me enough for it to become a “news” story in the media. I knew that a Palin/Letterman spat was irresistible catnip for the morons in the news media. Palin was very rarely doing interviews then, so I made sure that clip got into news bloodstream through the late Andrew Breitbart, though any record of that on Breitbart.com has since been scrubbed.

The next day I was invited on MSNBC to discuss the topic with Contessa Brewer. The interview was predictably contentious but also very weird: First of all, I was on an extreme delay from their Los Angeles studios and I was hearing myself in an echo, all of which made having a constructive conversation particularly difficult. But then things really got sideways when Brewer tried to compare her experience to Palin’s plight (unbeknownst to me at the time she had apparently once been told she had a wide backside by Don Imus). After I scoffed at such a comparison and criticized her coverage of the issue, she abruptly cut my mic off and ended the interview.

At first, this development seemed like a positive for my cause. For a conservative, getting attacked on MSNBC is almost literally a badge of honor. Rush Limbaugh spent multiple segments on his show that day praising the way I had handled Brewer and defended Palin. It was not primary motivation for me, but I am quite sure we sold a lot of DVDs based on all of the publicity.

Then, with the firestorm spreading, Palin went on the Today Show to speak with Matt Lauer and she verified that she had heard about the Letterman comments from me. This interview further ratcheted up the heat as the media was in a full-blown slow-news-week frenzy. When Letterman then gave the first of what would end up being two “apologies” that even he would later admit were arrogant, self-serving and tone-deaf death, outrage on the right seemed to be palpable.

At this point, there became a “movement” to try to protest Letterman and even call for his firing. Some guy I never heard of created the website FireDavidLetterman.com and thought that I should come to New York City the following Tuesday to rally outside of Letterman’s studio and to hold a press conference. The idea never seemed like a good one to me, but enough people kept telling me it was workable that eventually I was stupid enough to go along with it.

There are a lot of reasons conservatives are really bad at protests and all of them, in retrospect, were in full display in this situation. The haphazard “plan” was to hold the event on Tuesday afternoon during the taping of Letterman’s show. I am embarrassed to say that I honestly don’t know who we thought were going to be the people who would show up in the heart of Manhattan in the middle of the day to protest on extremely short notice.

How many unemployed rabid Sarah Palin fans who lived within walking distance of the Ed Sullivan Theater did we think there were?!

In my defense, I did raise concerns about all of this, but I figured I could salvage almost any situation. However, when the guy who ran the website informed me even he wouldn’t be showing up, I started to get real nervous.

Still, things were still looking okay when on the day before when I went on Fox News to discuss the planned rally and made a statement about Letterman’s sexual proclivities which would be at least partially vindicated by revelations about him later that year. Despite that, as I got on the plane from Los Angeles to New York City later that day I remember feeling a very strong tug-of-war between my heart telling me I was doing the right thing and my gut screaming at me to abort the whole doomed plan. Unfortunately, by that point it had all taken on a life of its own and I boarded the aircraft.

By the time my plane landed in New York five hours later, the world had changed. My phone exploded with messages that Letterman had apologized to Palin for a second time during Monday’s taping, and this time Palin had accepted it. Selfishly, I felt as if Palin had stabbed me in the back.

I really don’t recall exactly what communication there was with Palin leading up to my decision to go to New York, though I think Todd Palin had called to express his satisfaction with the efforts. I do have a vivid recollection that the general rule was that we purposely didn’t coordinate very much, if at all, in such situations (which makes this allegation of a conspiracy from Gawker particularly hilarious). In this way, I was a bit like a rogue agent who could be disowned at a moment’s notice if need be. Still, this seemed like an unnecessary betrayal.

Irate, I called Palin’s press secretary from the airport terminal to find out why the hell they couldn’t have held off for a day or at least given me some heads up, the explanation was completely and typically unsatisfactory.

Now I knew I was destined for humiliation. This mission was already on a wing and a prayer. Now with Palin accepting the second apology (which, I guess, I helped force) we barely had a prayer. After all, if even Palin was no longer upset, how could anyone else be?

When I got to the Ed Sullivan Theater after doing my radio show (ironically at CBS studios) a few blocks away, things were worse than even I had imagined. There were far more police and news media than there were protestors. The most visible anti-Letterman person there was actually an actor from the Opie & Anthony radio show there to mock us. The sound system the website guy had pretended to arrange for didn’t arrive and the bullhorn we had as backup had no batteries. In short, it was a circus with almost no crowd and with the big-top tent collapsing on top of me as the ring-leader.

If you ever get the urge to see someone hold a press conference in absolute agony, just watch this clip from our “rally.” While it is still painful for me to see, I actually think I did a heck of a job under mortifying circumstances. Regardless, the whole thing was obviously a massive, though well intentioned, mistake on multiple levels (though, we did make Dave’s “Top Ten” list that night).

A couple of years ago I returned to the scene of perhaps my greatest public embarrassment and had my wife take this photo of me expressing what I felt like doing to myself that day: 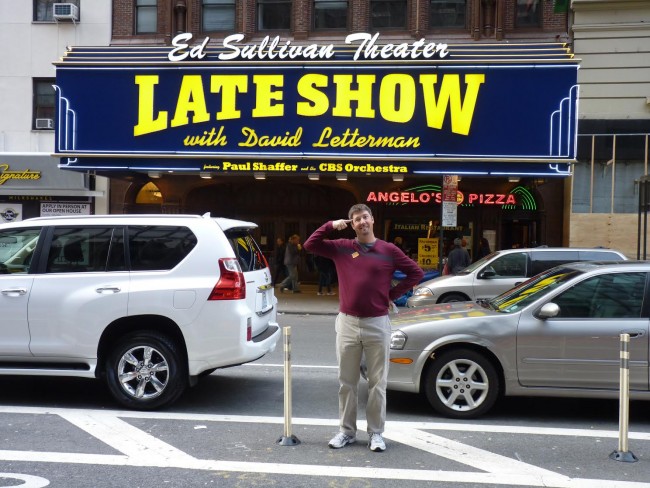 I was a huge fan of Letterman in my college days, but in recent years, especially during the 2008 election, his strong liberal lean really turned me off. While I regret most of my part in the failed effort to get him fired in 2009, as it turns out, comedy wouldn’t have lost much at all if we had somehow succeeded.

— —
>> John Ziegler is a documentary filmmaker who hosts a nationally-syndicated radio talk show. You can follow him on twitter at @ZigManFreud.