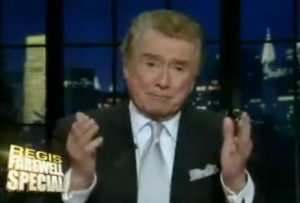 Regis Philbin signed off Friday morning, and right off the bat, things looked promising: a camera followed his “final walk” in black-and-white as some whimsical, sad piano music played as his soundtrack. He looked out the windows overlooking Manhattan on the fifth floor’s elevator lobby and gave a sad wave and a, “Goodbye, New York,” before heading downstairs to get Kelly Ripa in her dressing room. They held hands, headed to the studio floor, and Regis seemed to be getting a little choked up before they emerged to a standing ovation from a celebrity-packed audience.

“Tony Danza’s the biggest name here!” Regis exclaimed, as Kelly tried to point out all the stars in the crowd. At this point, Regis said, “I feel okay, I feel pretty good.”

The show then went into a retrospective of Dana Carvey, Jimmy Fallon, Ben Affleck, Darrell Hammond, and others doing their impersonations of Regis throughout the years. And this is where things started to veer a little into “disappointment” territory. They couldn’t have brought the real Dana Carvey out to do it live? Or any of the other stars? Regis hosted for 28 1/2 years and everyone loves the man, yet they fell back on video clips from years past.

After the retrospective, New York Mayor Michael Bloomberg appeared and made some corny jokes, using superimposed photos, about jobs Regis could now do (become a cab driver, join the Yankees, be a Calvin Klein model) before presenting him with a key to the city. Which was actually kind of awesome — how many times, outside of movies, do you actually get to see someone presented with a key to a city these days?

The next set of clips included a bunch of younger stars (Justin Timberlake, Selena Gomez, Emma Stone) talking about Regis memories, and how nice he was to them. This was followed by a cute segment about Regis constantly including his family in the fabric of the show, whether as guest hosts or through embarrassing stories he’d share. They brought his wife, Joy, on after this to discuss the mystery of, “what really happened on their honeymoon.”

All of this was really sweet and adorable, and probably meant a lot to Regis, but it was around this point when, “Where’s Don Rickles?” became a legitimate question. Part of Regis’ charm is how he dotes on his family, but he’s also self-deprecating and has a lot of funny friends. This was turning into a clips show.

Kelly decided to play a montage of her laughing at Regis’ jokes as fans from across the country held up “Regis” on pieces of paper. Again, this was all on pre-recorded video. When it was over, Kelly read a nice little speech that talked about how the 43 steps from her dressing room to the studio floor changed her life. Or something along those lines. She started to tear up, and it was time for commercial.

Back from break, the show’s executive producer, Michael Gelman, introduced a musical tribute to Regis, where the cast of Rent sang a version of “Seasons of Love” with new lyrics to represent Regis’ time on air (“995,600 minutes; 995,000 memories”). Regis seemed to get a little glassy-eyed listening to this. Or maybe he was crying over the 4,000th set of clips that played in the background as the cast sang.

The most insulting part of the show then arrived, with the commercial break teasing “More surprises to come.” If by “surprises,” they meant, “Bob Iger, the CEO of the Walt Disney company,” then they succeeded. For many years to come, people will surely talk about Bob Iger’s surprise appearance on Regis’ last show.

Iger’s appearance was preceded by an almost cruel introduction by Kelly, as a pause she put in her delivery implied something far more lofty than Bob Iger. She asked everyone to, “Please welcome the President … … … and chief executive officer of the Walt Disney Comapny — Bob Iger!”

There would be no Don Rickles today, apparently. Or President Obama.

Build the man a statue! People would come to take pictures next to it! Bah.

At this point, there were just a few minutes left in the show for Regis to officially sign off. “This is the time to say goodbye to everybody,” he said. “God bless you all, and I hope I see you again real soon. Thanks everybody.”

And with that, his family came down to hug him, he was embraced by — that’s all we saw, as the show cut away to commercial.

If the plan here was to give Regis Philbin a send-off worthy of 15 years of service at a local news station, ABC gets five stars. And, to be fair, maybe this is what Regis wanted — a simple show of clips and memories. Fans across the country probably got a good five minutes of happy tears out of it. But still. The man is a legend. They sent him off essentially in the same manner that the guy who finishes 11th in American Idol gets sent off — in front of a crowd that includes Tony Danza, as clips play over a sappy song, ending in a big group hug.

But at least he got a plaque. On the side of a building.

Enjoy a clip of Regis’ final sign-off below, courtesy of ABC: