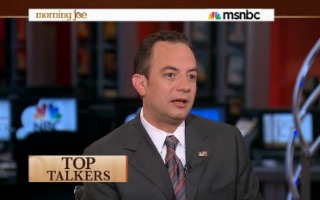 RNC chair Reince Priebus appeared on Morning Joe Tuesday, where he was asked why the events in Benghazi — specifically the White House’s handling of it — should be a “voting issue” in this election.

Preibus described it as “a 3 a.m. call” before noting the shift represented by Clinton’s recent acceptance of blame over Libya’s security issues.

RELATED: Secretary Of State Clinton: ‘I Take Responsibility’ For Security Prior To Libya Attack

“I mean, the buck stops at the White House,” he continued. “That’s what Hillary Clinton said back in 2008. She’s saying something differently today. But I think it’s a matter of leadership, I think it’s a matter of straight answers. Look, terrible things can happen. And that’s not necessarily, obviously, a reason to, you know, to say that somebody isn’t fit to lead. But I think it’s a matter of how you act once something terrible happens and how honest are you with the American people.” And this White House, he said, has either not been completely straight with the American people or, alternately, has been “sloppy” in gathering details and sharing the truth.

Clinton’s actual 2008 quote is that the buck stops “at the Oval Office.” Here’s video of the moment:

“You have to have a couple good facts on your side,” he added, if you hope to win the election.

John Heilemman responded by saying that the President has “quite a few decent facts on his side on foreign policy — one of them being Osama bin Laden.” He then wondered whether there was anything the President could say during the debate that would have the other side conceding he’d made a good point.

“I don’t know,” Preibus responded, adding that he’s not really the guy to go when it comes to answering hypotheticals about the President.