Reince Priebus: Don’t Count Joe Biden Out Of Debate Just Because ‘He’s Made A Few Gaffes As Of Late’
Video

Reince Priebus: Don’t Count Joe Biden Out Of Debate Just Because ‘He’s Made A Few Gaffes As Of Late’ 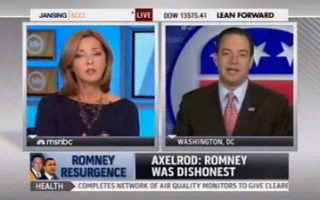 RNC chair Reince Priebus appeared on Monday’s Jansing & Co., where he was asked to weigh in on David Axelrod and Robert Gibbs‘ weekend comments regarding Mitt Romney‘s “dishonest” during last week’s presidential debate in Denver.

“You know, this has been the oddest few days, you know, narrative coming out of the Democrats, the fact that somehow Mitt Romney changed what he’s been saying for the debate,” said Priebus, adding that he found the whole thing to be “childish” and that Barack Obama demonstrated during the debate that “he didn’t bring the A-game.”

“No, it’s not,” Priebus replied. “Because he’s been saying the entire time that, while he would be in favor of an across the board tax cut of 25% for every taxpayer, that for those making over a certain amount of money, he would close tax loopholes so that their overall taxes that they pay and the overall tax plan would be tax neutral. I mean, it would be revenue neutral.”

Later, he added that “you all have been talking about this story that Mitt Romney had been saying and reported in other places that this is a ‘new, softer side of Mitt Romney.’ He’s been telling that story for months. And so, I mean, this is all just sort of this generated media narrative that he is coming up with all sorts of new policies and new, touching stories.”

Switching topics, Jansing then asked whether Romney can move the polls in a place like Ohio.

“Well, I think on an overall question, I would agree with all of you that this is going to be an incredibly close election,” said Priebus. “I thought that the polls were closing before the debate; the debate certainly helped close them even further. I think you are going to see this come down to a ground game. You’re going to see it come down to the traditional door-to-door, person-by-person ground game. As far as whether you can win without Ohio, you know, I think you can. I think obviously doing well out west, in Colorado and Nevada.”

“Well, certainly,” Priebus replied. “Of course, it makes it tougher. But I think if you look at the polls as of late in Ohio, they’re going to tighten.” He then conceded that this race is going to be very tight across a number of states.

Later, Priebus urged everyone not to discount VP Joe Biden‘s debating ability just because “he’s made a few gaffes as of late.”