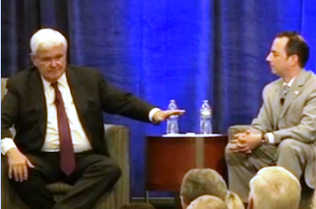 During the question and answer session at Wednesday’s 2013 Republican National Committee Summer Meeting, an African-American woman stood up and asked RNC Chairman Reince Priebus and former House Speaker Newt Gingrich what the Republican Party was doing to connect with her community. “I live in a world that’s different from most of the people that’s in this RNC,” the woman said, “and it’s like we don’t exist.”

“I mean, everybody’s talking about Hispanics,” the woman continued, “but African-Americans built this country, and continue to be ignored by everybody. And since we’re no longer the largest minority, we get pushed to the bottom.” She said she saw “America’s future” in the Egyptian and Iranian revolutions, where the young and unemployed are rising up against their leaders.

“Are you really listening to the people who are being pushed down, who are being disenfranchised, who don’t have a pot to whatever in and a window to throw it out of?” she asked the two men. “Because I don’t hear their voices resonating, not in this party, but I don’t hear them in the Democratic Party either. I hear the Democrats saying to us, let us lead you to stay where you are. What we have to do is offer them some hope to be better than they are.”

Gingrich handled the answer himself, leaving Priebus mostly silent on the issue. “I would just suggest to you,” Gingrich told the woman, “we ought to be in the business of liberating every African-American, every Asian-American, every Latino-American small business man or woman.”

He praised the RNC chairman for doing “the best job of any chairman I have ever seen by reaching out, and if he can drive this into the states–if those of you who are chairmen and executive directors can pick up of the rhythm of what he’s trying to do in reaching out to every American of every background, we will be in dramatically better shape by the fall of 2014.”