Reince Priebus On Health Care Mandate: ‘Our Position Is The Same As Romney’s: It’s A Tax.’ Huh?
video

Reince Priebus On Health Care Mandate: ‘Our Position Is The Same As Romney’s: It’s A Tax.’ Huh? 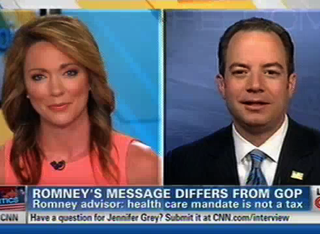 Oh, dear. The Republican Party is having a bit of a message discipline problem, on account of apparently no one understanding what Mitt Romney‘s position on health care is. Almost exactly 24 hours after senior Romney adviser Eric Fehrnstrom definitively stated that his candidate believed the individual mandate in the Affordable Care Act was “not a tax,” Republican National Committee Chairman Reince Priebus appeared on CNN’s Starting Point to offer his support: “Our position is the same as Mitt Romney’s: a tax.” Who exactly does Priebus think he’s kidding here?

Obviously not Brooke Baldwin, who tilted her head somewhat in confusion and reminded Priebus that what he said was the opposite of what the Romney camp had been saying all day. “The Supreme Court has stated that Obamacare is a tax, and so since they have ruled it’s a tax, it’s a tax,” Priebus told Baldwin, who tried to explain that that was “not the exact phraseology of the Court.” She asked him to clearly state the position of the RNC.

He replied: “Our position is the same as Mitt Romney’s position: it’s a tax.”

I’ll let that sink in for a second.

Baldwin challenged him on this point, and Priebus explained that the mandate is a tax because “the Supreme Court said it’s a tax” and “that’s what Barack Obama’s lawyer argued.” Priebus then argued that most Americans oppose the ACA, which Baldwin responded to with a number of polls that showed that was not the case. Priebus replied that “a bunch of them” said Americans did indeed oppose Obamacare. He ended the segment arguing that “people don’t want Europe in America [ed. note– what?] and the solution to that is firing Barack Obama.”

The fallout from Fehrnstrom’s comments has fallen mostly on the senior adviser himself, and that makes sense to a certain extent– Fehrnstrom’s claim to fame before this week was comparing his candidate to an Etch-a-Sketch. But he and, by proxy, Romney, are the only Republicans to be making the subtle distinction between something being a tax and being constitutional under Congress’s taxing powers, which are not one in the same. This being a needle too thin to thread for Priebus, a man whose political ideology is about as complex and nuanced as the chorus to an LMFAO song, he simply decided to rewrite the official and far more respectable Romney campaign line.

This is not new or surprising behavior from Priebus, whose cringe-inducing tenure as Republican Chairman includes such highlights as abandoning Gov. Scott Walker to his own devices in Wisconsin (luckily for Republicans, Scott Walker’s own devices are pretty formidable) and then giving the credit post-recall win to his crowning achievement, Mitt Romney. As the head of the party, Priebus is entitled to believe he gets a say in what Republicans believe. The problem is, everything he believes is either milquetoast or wrong and results in things like shepherding the Republican Party into nominating Mitt Romney, a man with no visible voter base or recognizable appeal who is single-handedly responsible for bringing the individual health-care mandate to America.

If this latest episode of Priebus buffoonery doesn’t make it abundantly obvious that replacing an excess of personality with the distilled essence of inoffensiveness is always a bad move (how did replacing Jesse Ventura with Tim Pawlenty work out for you, Minnesota?), the Republicans are hopeless. And before you reply that Republicans have a bright future in people like Gov. Chris Christie and Sen. Marco Rubio, ask yourself this: given his treatment of Scott Walker and, now, his golden goose Mitt Romney, would Priebus be as supportive of candidates like Christie and Rubio as those potential political supernovas need an RNC chair to be?

Watch Priebus perplex a nation via CNN below: