RNC’s Reince Priebus: ‘For Those People That [Gay Marriage] Is Their Issue, They Have A Clear Choice’
video

RNC’s Reince Priebus: ‘For Those People That [Gay Marriage] Is Their Issue, They Have A Clear Choice’ 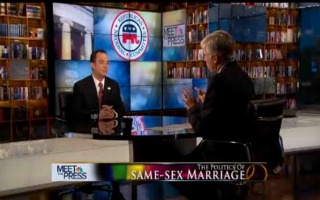 Appearing on Sunday’s Meet the Press on NBC, Republican National Committee Chairman Reince Priebus told host David Gregory that the Republican party and their presidential nominee will continue to support defining marriage as existing only between a man and a woman. He said that for those voters who will determine their support for a candidate based on the issue of gay marriage alone, “they have a clear choice.”

Gregory opened the segment saying that much has changed in the gay marriage debate over the course of the last week, starting with Vice President Joe Biden expressing support for gay marriage on last Sunday’s Meet the Press and culminating in President Obama saying that he supports same-sex marriage in an interview with ABC News on last Tuesday. Gregory asked Priebus if he thought gay marriage “would be a defining issue for your party and for this election in the fall.”

Priebus responded that the terms of the gay marriage debate have been set, and for those voters for whom this election is going to be decided on that issue alone, their choice is clear:

I’m not sure if it’s going to be a defining issue, but clearly for people in America – where gay marriage is their number one issue, we clearly have two candidates with two different views. On one hand, you’ve got Barack Obama who is now, I guess, going to promote and perhaps crusade for this issue. And you have Mitt Romney who’s been consistent and I think in line with most Americans – which is that marriage ought to be defined between one man and one woman. So, for those people that this is their issue, they have a clear choice.

Priebus went on to say that the election is still going to be decided for most voters on economic issues.

Gregory asked Priebus to respond to what he characterized as a 20 point swing in support of same-sex marriage rights over the course of the last eight years. “A lot more Republicans in favor of gay marriage than there were in 2004,” said Gregory.

“If you look at the 32 states across America where people were asked do you think marriage should be between one man and one woman, and in every single case – including North Carolina – the answer was yes,” Priebus responded.

Gregory asked Priebus if Romney was targeting social conservatives on this issue. Priebus said that, again, this is a clear choice for those voters as it is for all voters on the issue of gay marriage.

Finally, Gregory asked Priebus for his thoughts on Sen. Rand Paul (R-KY), who recently said that he “didn’t think [Obama’s] views on marriage could get any gayer.” Gregory asked if, as RNC chair, if he thought those comments were appropriate.

“I don’t know what Rand – what he meant by that,” said Priebus “I’ll defend the Republican party and I can defend our nominee, Mitt Romney.” He did not respond directly to Paul’s incendiary comments.

Watch the segment via NBC: