Reince Priebus Takes On ‘Outsourcer-In-Chief:’ Obama Is Smart, He ‘Knows This Is All A Sham’ 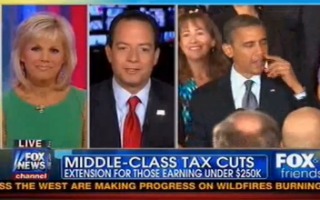 RNC chairman Reince Priebus stopped by Fox & Friends Tuesday morning, where he shared his criticism of President Barack Obama as an “outsourcer-in-chief.”

Priebus, who is planning an Iowa trip to discuss “Barack Obama’s record and outsourcing jobs,” told host Gretchen Carlson that raising taxes at this point is “a bad idea because 840,000 small businesses are going to have to pay more money under Barack Obama’s plan now at a time that they can’t afford it. So, there’s more to this than this divisive rich versus poor game that the President wants to play. This is about raising taxes on small businesses and that’s why a lot of Democrats don’t agree with the President either. And let’s face it, he knows exactly what’s going on. He knows this isn’t going to pass, and he also knows that this is going to cut off 1 percent of the gross domestic product in this country when we’re only growing at 1.6 percent.”

“He’s a smart guy,” Priebus concluded. “He knows this is all a sham and we need to call it on him.”

“We have almost twice the money in the bank that the Democratic National Committee has,” he later added, announcing that “We’re going to unveil a messaging plan now today in Iowa on Barack Obama being the ‘outsourcer-in-chief,’ taking taxpayer money, sending it overseas, not to working families.”

“But the outsourcing response today, to be fair, is in response to the President calling Mitt Romney an outsourcer of jobs,” Carlson pointed out. “And I just want to weigh in on that a little bit. Because I think some of the critiques against republicans in the last couple of weeks have been why has Mitt Romney been more passive? Will he change now today? You’re going to unveil this website. Do you think that Romney’s surrogates, now, will become more aggressive against President Obama as well?”

“Well, Gretchen, I just — I think we’ve been extremely aggressive about this President,” he responded. “I think what you’re going to see, though, is that through the summer and fall, things are going to ratchet up and talk about President Obama’s record and you’ll see an aggressive front raised up and I think you’ll see that we’re raising the money that we need in order to launch the attacks that President Obama has been launching for three years now. So, I mean, it takes some time for the party coming as a challenger to raise the funds necessary to get out there. We’re going to be out there today, Gretchen, and I guarantee you that this thing is going to ratchet up through summer and also the fall and we’re going to make Barack Obama one-term president and save this country.”