Reince Priebus to MSNBC’s Thomas Roberts: ‘Sounds Like I’m Debating the Chairman of the DNC’

Reince Priebus to MSNBC’s Thomas Roberts: ‘Sounds Like I’m Debating the Chairman of the DNC’ 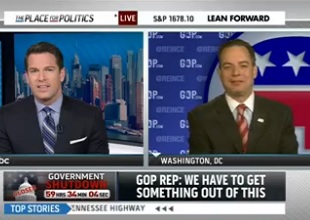 In a contentious interview on MSNBC Thursday morning, anchor Thomas Roberts asked Republican National Committee Chairman Reince Priebus to respond to some of President Obama‘s just-completed speech, which prompted Priebus to accuse Roberts of using “talking points,” and to tell Roberts “it sounds like I’m debating the chairman of the DNC here, Thomas. That’s fine. I’m happy to debate you.”

Roberts told Priebus that the President says he’s willing to negotiate, and asked “But why do we need to attach the solutions or changes that go along with the law, that has been vetted by the supreme court, by a mandate by the people reelecting the president and both houses of Congress, why should that be attached to shutting down the government, and as the president is saying, basically writing a ransom note and asking for some type of goody bag in response for Congress doing its job to govern?”

“Those are some pretty good talking points,” Preibus responded.

“They’re not talking points,” Roberts protested. “That’s directly from what the President just gave us.”

“It sounds like I’m debating the chairman of the DNC here, Thomas,” Priebus cracked. “That’s fine. I’m happy to debate you.”

“No, no, no,” Roberts continued. “These are not talking points, and this is about what’s going on right now in Washington, DC, and why they have to associate the health care law with running our government.”

“That was in the president’s speech,” Roberts pointed out.

The pair went on to engage in a debate that was, in large sections, unintelligible due to the crosstalk, but Roberts did attempt to pin Priebus down on the shutdown strategy, asking him “Do you think if we had a Republican president in office, and the Democrats wanted to stick some gun legislation into the budget, a CR, a continuing resolution for our nation’s budget, how do you think that would go over? Would you approve of that tactic from the left? Because that’s the tactic of the right.”

If the Republicans were in the White House,” Priebus said, “we wouldn’t have a president that didn’t pass the budget.”

“Just answer the question,” Roberts demanded. “Would you support having that methodology and actually taking the government hostage?”
Priebus said he would support a Republican president “sitting down and negotiating like any other president in America would do.”

The interview continued along the same contentious lines, with Priebus, at one point, responding to Roberts’ use of the phrase “with all due respect” by saying “Oh, you are respecting. Keep it coming, Thomas.”

Here’s the clip, from MSNBC Live: