‘Release The Drones, Said The Queen’: Rand Paul Reads From Alice In Wonderland During CIA Filibuster 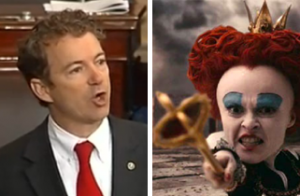 Senator Rand Paul (R-KY) stood up in the Senate chamber just before noon on Wednesday and declared his intention to “speak until I can no longer speak” in opposition to the nomination John Brennan for the position of CIA director. Without the 41 Republican “no” votes needed to prevent a cloture vote and block Brennan’s nomination, Paul was forced to halt the proceedings by standing and speaking for as long as he could.

“I rise today to begin to filibuster John Brennan’s nomination for the CIA,” Paul began. “I will speak as long as it takes takes, until the alarm is sounded from coast to coast that our Constitution is important, that your rights to trial by jury are precious, that no American should be killed by a drone on American soil without first being charged with a crime, without first being found to be guilty by a court.”

Paul repeated his fears that if the Obama administration could justify the drone strike that killed American citizen Anwar Al-Awlaki in Yemen, what’s to stop the government from killing U.S. citizens while they are “sitting in a café” on American soil. But shortly after he began his filibuster, Paul turned to external source for inspiration: Lewis Carroll‘s literary classic Alice’s Adventures in Wonderland.

“They say Lewis Carroll is fiction,” Paul said. “Alice never fell down a rabbit hole and the White Queen’s caustic judgments are not really a threat to your security. Or has America the Beautiful become Alice’s Wonderland?” Paul then looked down and began reading directly from Carroll’s text:

“‘No, no,’ said the queen. ‘Sentence first; Verdict afterwards.’

‘Stuff and nonsense,’ Alice said widely — loudly. ‘The idea of having the sentence first?’

Instead the Queen’s infamous exclamation, “Off with her head,” Paul read his own, updated line: “‘Release the drones,’ said the queen, as she shouted at the top of her voice.”

By connecting the Alice story to the drones debate, Paul was echoing the judge who early this year ruled that the Justice Department memos on the program could remain secret. Judge Colleen McMahon wrote in her ruling, “The Alice-in-Wonderland nature of this pronouncement is not lost on me.”

As of 2pm ET, Sen. Paul has been speaking for more than two hours straight without stopping.