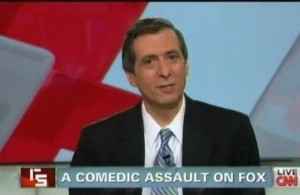 The normally sharp Howard Kurtz really missed the boat in his rundown of the recent Jon Stewart/Chris Wallace interview, and Politifact-ual aftermath. On Sunday morning’s Reliable Sources, he and his panel missed the mark on Stewart’s response to Politifact’s charge that his assertion about Fox News viewers was false, and when panelist Aaron Barnhart tried to bring up the crucial edit of an exchange about Fox exec Bill Sammon (whom Barnhart called “Bill Senior’), Kurtz promised to go back to it, but never did.


First, there was Kurtz and panel’s deconstruction of Stewart’s response to Politifact, which they characterized as a counterattack on Fox, with David Zurawik comparing it to the New York Times correction page “saying ‘Well, we made a mistake and we’re sorry for it, but The Wall Street Journal made 21 mistakes, they’re worse than us.'”

The point they’re missing is that Stewart’s overarching criticism in that segment, in which he listed 21 Fox News statements that Politifact had rated “false” or worse, was of Politifact. While Politifact was correct to point out that Stewart went off track when he qualified his statement with the phrase, “in every poll,” it’s fair to criticize them for failing to note that Politifact themselves have consistently rated statements on Fox News as “false,” or even “pants on fire,” which supports Stewart’s broader point. Perhaps Stewart would have been better served by saying “Fox News consistently misinforms viewers, even if some polls show the misinformation doesn’t always stick.”

In fact, a review of Politifact’s archive shows only two “false” claims by CNN contributors, and one by Piers Morgan, while MSNBC did a little worse, with 12 “false” or worse (Rachel Maddow had four, but one of them was hotly contested, and Mediaite judged that Maddow and Politifact were both wrong. Ed Schultz took the silver with 3, Keith Olbermann and Joe Scarborough had two “falses” each, and Lawrence O’Donnell, just one.)

Stewart’s 21 examples were hardly comprehensive, either. Fox News contributor Sarah Palin alone is responsible for 21 “false” or worse statements, though 13 of them were from before Fox hired her.

With such a disparity, it’s fair for Stewart to wonder why Politifact neglected to examine his claim on their own terms. If Fox viewers somehow end up not being the most misinformed, then does that mean they’re not paying attention to what they’re watching, or is Politifact just picking on Fox?

More glaringly, though, Kurtz fails to get back to the true “smoking gun” of the Stewart/Wallace interview, the Bill Sammon edit. Kurtz, in fact, dismisses Stewart’s criticism of the edits by pointing out that the full interview was later available online.

To be fair, Stewart himself buried the Sammon edit in favor of a sound bite in which Chris Wallace “gives away the game” by saying that Fox News tells “the other side of the story,” but others, including Media Matters and Keith Olbermann, did pick up on it, and Kurtz should have, too. Bill Sammon is Fox News’ Washington managing editor, and his leaked internal documents have raised serious questions about his objectivity. In the unedited footage below, Stewart references Sammon’s emails, a seconds-long segment that doesn’t seem likely to have been cut due to time constraints:

Wallace himself conspicuously omitted any mention of the Sammon edit from his response on Sunday.

As Stewart said, Fox News is home to many fine journalists (including, soon, my White House colleague, Ed Henry), and just as Sammon’s alleged injection of partisanship into the news division undercuts the work that they do, so, too, does this edit. Relegating the full interview to Fox’s website cut its audience exponentially, and Kurtz missed an opportunity to correct that, and raise an important point that directly impacts the debate Stewart and Wallace were having.