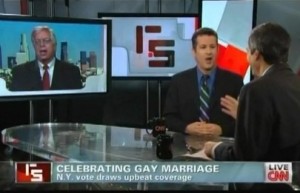 On Sunday morning’s Reliable Sources, a debate over the media’s treatment of New York’s recently passed Marriage Equality Act, between conservative radio host Dennis Prager and AmericaBlog’s John Aravosis quickly devolved into a series of tangents and interruptions that missed the entire point of host Howard Kurtz‘s question. Kurtz wondered if there was anything wrong with the news media’s “relentlessly positive” coverage of the law’s passage.

At the heart of this question lies a crucial distinction about the role of journalism, a role which the media has consistently abdicated in favor of false balance. It’s a familiar criticism; the facts overwhelmingly support one conclusion, but the media decides to also throw in a “some say the sky is actually pink” clause to balance things out. In the case of marriage equality, the question should be, did the media exercise sound judgment in its coverage? Is there a compelling “other side” to the story?

Instead, Aravosis opens with a ridiculous premise, saying that “whenever you have a political contest, and one side wins, they cover the victor.”

Not only is that premise false, it papers over the relevant fact, that coverage of the Marriage Equality Act is a rare example of the media doing its job. The media’s coverage of Proposition 8 (which Prager correctly cites), and even more recently, the Citizens United Supreme Court decision, did not focus on the so-called “victors,” but on the negative consequences of each of them. Aravosis does point out that opposing viewpoints get plenty of airtime in all of these cases, but misses the point that the tenor of the coverage in these cases wasn’t the result of some “cover the winner” default, but of sound editorial judgment.

In the case of marriage equality, it appears that journalists have made the judgment that, whatever your personal beliefs, the disparity between the rights of gay and straight people to marry is unjust. It’s the same sort of judgment that journalists have made about other forms of discrimination, long before they were codified by law, and which demonstrate one of journalism’s most important functions: to act as our national conscience, to hold the unjust accountable.

That function was largely abdicated in the run-up to the Iraq War, and has gradually eroded in favor of horse-race political coverage and he said/she said “balance.” Kurtz and his guests missed a chance to point that out.

From there, the “debate” got sidetracked into a discussion of Prager’s reasons for opposing marriage equality, and Aravosis’ constant interruptions of same. Even here, he doesn’t engage Prager’s easily-rejoined objections. Prager seems to think that the media ought to cover the fact that some churches would rather take their adoption marbles and go home, rather than treat same-sex couples as equals. Instead of pointing out how this says more about those churches than it does about marriage equality, Aravosis opts for transparent straw-man arguments, bizarrely saying, at one point, that “Now, Dennis is talking about I’m trying to turn him into a woman.”