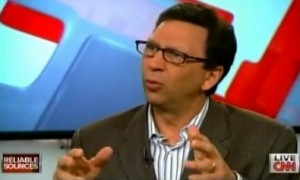 Among the many discussions of this week’s Osama bin Laden news Sunday morning was a segment of CNN’s Reliable Sources that was marked by several exceedingly absurd questions, and one sad revelation by panelist Frank Sesno, director of the School of Media and Public Affairs at The George Washington University. Many of his students were involved in the spontaneous celebration in front of the White House last Sunday, and told Sesno they were “distraught” over media portrayals of the celebration as “bloodlust.”

The segment began with an exploration of the death photos that have not been released, and the creepily narcissistic videos that have been. For a show that focuses on the media, their exploration of these contrasting issues was perfunctory and superficial. The same media that seems to be swallowing the idea that concealing the death photos will somehow combat propaganda are willing participants in the government’s propaganda effort against bin Laden. Average Americans can be more than happy to learn that he was hunched over on the floor, greedily searching his sloppily-wired cheapo TV (perched atop a particle board desk that looks like it came out of a Staples dumpster) for clips of himself, but journalists ought to at least notice the inherent contradiction of being spoon-fed these clips, while the death photos are withheld.

Among the more inane questions involved the President’s visit to Ground Zero, and to the SEALs who conducted the raid. Host Howard Kurtz wondered if the administration was “trying to keep this story in the news a little bit?”

Right, kinda like trying to get people to look at a flaming fireworks factory. Instead of laughing, New York Times correspondent Peter Baker quickly agreed, and neither recognizes that failure to do any of these things would have resulted in headlines like “Obama’s SEAL Snub,” or “Obama No Hero, Won’t Go to Ground Zero.”

But saddest of all was Sesno’s revelation that some of the students at last Sunday’s remarkable celebration in front of the White House were  made to feel as though their actions were inappropriate. This is probably due to knee-jerk discomfort at celebrating anyone’s death, but anyone who has lived with the consequences of the 9/11 attacks for all these years should understand that bin Laden’s death represents a much deeper, and broader, context than one man’s death. They were cheering for the small measure of justice it represented for all Americans, and for the symbolic promise of freedom from fear, and perhaps, even some forgivable bloodlust at the killing of a bogeyman whose creation was abetted by the same media that now seeks to judge them for it.