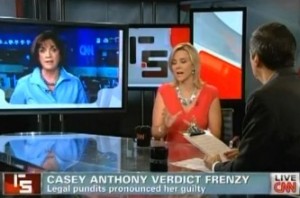 After a week that was filled with news and commentary regarding the verdict in the Casey Anthony murder trial, Howard Kurtz spoke with Lauren Ashburn and Diane Diamond about the role of legal pundits. All seemed skeptical over Nancy Grace‘s role in the coverage, with Ashburn explaining that Americans just need to be entertained by everything and with Kurtz suggesting many other legal analysts may have simply viewed this trial as an opportunity to become a star, like many journalists did with the O.J. Simpson trial.

Ashburn in particular pulled no punches and even targeted a comment from Mediaite founder and ABC News legal analyst Dan Abrams. Ashburn argued that Abrams “actually made the argument that ‘we learn about the justice system through this’ and I say that’s bunk!” Uh-oh, Ashburn must be angry because now she is hurling four-letter words! Instead she claimed people actually learn about the justice system in classrooms (like she did from Floyd Abrams, Dan’s dad) and presumably not from Nancy Grace screaming “the devil is dancing.”

While Diamond preferred that serious matters like murder trials be left to experienced journalists to report on rather than just anyone, it seemed that whoever it is that might be discussing juries, burdens of proof or anything else legally-related might be at the very least sparking an interest in viewers to go out and learn more about the judicial process. And for anyone who can’t take Floyd’s class like Ashburn did, but is still interested in the law, then ultimately maybe the excess Casey Anthony coverage isn’t such a bad thing?