Is Partisan Media To Blame For Making Obamacare So Divisive?
VIDEO

Is Partisan Media To Blame For Making Obamacare So Divisive? 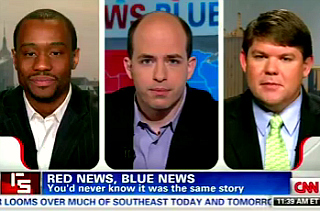 The ever-inventive Brian Stelter considered the coverage of Obamacare from MSNBC and Fox News on Reliable Sources Sunday morning, and asked if the rollout of the Affordable Care Act might have gone differently had the television media focused more on reporting and less on commentary. Stelter featured two partisan commentators, Marc Lamont Hill and Ben Ferguson, to debate the divisiveness of the issue not as pundits but as “regular people” confronting the barrage of coverage.

The crux of the disagreement came over why the right had been so successful at getting the anti-Obamacare narrative to stick. Hill argued that it was because the so-called liberal media (of which MSNBC is a metonym) had been unsuccessful in forcefully countering Fox News’ drumbeat of criticism, while Ferguson said the narrative was a representation of a reality in which millions had their coverage cancelled.

“Until they start to have consistency and truth in numbers, truth in the website working, Americans are still going to be very skeptical,” Ferguson said.

“If by Americans you mean Fox News,” Hill responded. “The dominant narrative that we hear is people don’t trust [the ACA]. I haven’t heard people say that, I’ve heard news outlets say that. I’m not convinced they’re one and the same.”

“The right has always been much more organized in their messaging,” Hill continued. “For the last twelve months you’ve heard nothing but Obamacare won’t work, people won’t sign up, and it still might possibly be repealed, when none of those things were actually true. I haven’t seen MSNBC come in equal force to Fox News…If we’re going to be partisan, at least let it be on equal footing.”

“It’s not the media per se spinning it, it’s the American people are experiencing the cancellation, and they’re saying they can’t keep their doctor,” Ferguson said. “That is real life for Americans, that has nothing to do with the media.”