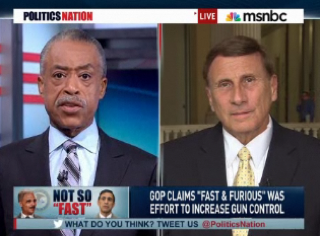 Al Sharpton had more than a few questions for Rep. John Mica today about tomorrow’s vote to hold Attorney General Eric Holder in contempt for not releasing Fast and Furious documents today. So many questions, in fact, that Sharpton almost didn’t let Rep. Mica speak, asking and then refusing to hear the answer to whether Rep. Mica new about a series of other Bush-era projects, of which Rep. Mica shouted over his host that, at the very least, he knew those didn’t amount to any official death toll.

Rep. Mica told Sharpton he did not think the Obama administration were “actually hoping for violence,” as he had asked, but that they launched the program looking “to blame the violence and drug trafficking… on guns from the United States.” Adding that “the whole thing became terribly botched,” he noted that the Congressional committee was aware “that they tried to cover this up” and that they knew about it. Sharpton inquired about Attorney General Holder himself, saying “he didn’t know about it” and asking why he was being held in contempt. Rep. Mica tried to explain “he is in contempt or not providing us with the documents,” and telling Sharpton, “you’re talking somewhat in circles,” but Sharpton shouted at him that “ya’ll are talking in circles” and began listing off mid-2000s programs of a similar nature to Fast and Furious.

Rep. Mica replied that he didn’t “know much” about Operation Wide Receiver, but knew that whatever it was hadn’t been as botched as Fast and Furious because there were no reported deaths, as opposed to the hundreds on record for Fast and Furious. Or at least that’s what it sounded like Rep. Mica was saying, over Sharpton yelling “you just said you didn’t know anything about it!” and “how do you know?” over the answer to the question, “how do you know?” After a few attempts to explain that Rep. Mica knew there weren’t deaths of record, and that it was possible to know this without know what programs where happening while these deaths were not occurring, an apparently stunned Sharpton noted, “it’s amazing how you knew more and more as we talked.” It is unclear how Sharpton knew that Rep. Mica was providing more information, since he did not stop talking during the duration of Rep. Mica’s attempts to answer. The segment appeared to go somewhat further than intended, as Sharpton continued to attempt to subtly accuse Rep. Mica of lying while Rep. Mica tried to calmly explain what he had several times before to little avail.

Passion for the issue aside, and Fast and Furious is rapidly (and furiously?) becoming the hottest issue of the summer, it seems somewhat inefficient to ask questions and then continue shouting over them, as if to no one in particular, while one’s guest is making an attempt to calmly answer the question. The end result for Sharpton is that he comes off as not really caring what the answer to the question is– if he cared about the answer, why not stop talking for a few seconds and listen?– and having no base level of respect for Rep. Mica, if only by virtue of his national office. Endlessly berating a public official without giving him a chance to speak does not convince anyone watching Politics Nation that the goal of the show is to find answers to major national issues and, entertaining a cable news tactic as it may be, isn’t exactly clearing the water or providing any information on the crucial contempt vote in the works tomorrow.