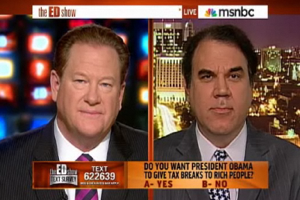 Congressman Alan Grayson‘s days in the House of Representatives may be numbered, but his liberal ire at all things Republican has yet to find a limit. Grayson visited MSNBC’s The Ed Show yesterday for a victory lap of sorts after his posterboard-laden attack on Fox News personalities’ salaries, where he reminded cable news host Ed Schultz that cable news hosts support the Bush tax cuts because they personally impact their wealth.

Rep. Grayson’s mainly argued once again that no one on cable news who supported the Bush tax cuts did so earnestly; rather, they supported the cuts because there was sufficient personal incentive for them to do so. “When you listen to these people talk about tax cuts for the rich and how it’s going to benefit the economy…it’s a lie,” he told Schultz, referring to the right-of-center commentators on Fox News (and Rush Limbaugh) that he pointed out on the House floor. “I think they should confess,” he continued, “that they keep pushing tax cuts for the rich [because] they want tax cuts for themselves.”

Schultz did earnestly offer as a counterpoint that anyone at “this level of broadcasting” probably fell into the category of “wealthy,” such that it was likely impossible to find anyone on cable news that was poor enough to meet Rep. Grayson’s rigorous requirements for honesty, but otherwise agreed with his points, down to Grayson’s quip that these commentators make their money “lying to the gullible.” Grayson also stood firmly behind President Obama, suggesting that the best political move for him would be to refuse to sign any bill that extends the tax cuts.