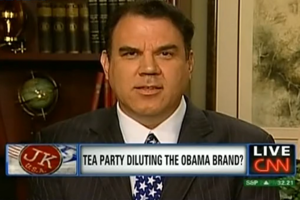 Florida Democratic Congressman Alan Grayson is mired in controversy yet again, this time facing the bizarre accusation that he is manipulating the Tea Party to split the Republican vote. Confronted by the question on today’s John King USA, Grayson first accused host Jessica Yellin of getting her facts wrong, then declared that Sarah Palin was a puppet under his control.

Yellin initially brought up the fact that a pollster working for Grayson had launched a campaign for public office under a Tea Party platform. This brought up accusations that Grayson had put her up to running in order to sabotage the Republican Party. Grayson clarified, rather aggressively, that “someone we used to poll republicans last year went ahead and declared her candidacy for a state house position and is not running against me” and told Yelling to “get your facts straight.”

Yellin insisted, however, that he respond to “the accusation that you are in some way supporting a Tea Party effort to help fracture the vote.” What followed seemed to be an attempt at sarcasm that was simply too weird to be funny– it’s a space Grayson’s jokes have inhabited before. He “fessed up” to not just manipulating the Tea Party, but creating it: “In the same way that Al Gore invented the internet, I invented the tea party. Isn’t that well-known? Sarah Palin is a puppet. She does whatever I tell her to.”

Like all bizarre clips, this one ends with an Alvin Greene reference.