Rep. Allen West On Tim Geithner: ‘When You Open That Refrigerator Door The Lights Don’t Come On’ 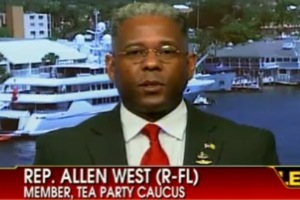 Republican Congressman Allen West appeared on Fox & Friends and was none too pleased with remarks by Senator John Kerry and advisor to President Obama, David Axelrod, where both described the credit situation as the “Tea Party downgrade.” West replied “I find those comments to be absolutely the most insidious thing I ever heard.” Yet Treasury Secretary Timothy Geithner was West’s real verbal target.

Upon hearing the news that Geithner plans on sticking around in the role of Treasury Secretary throughout the rest of Obama’s term, West provided a blunt assessment of Geithner’s job performance:

“Having had Timothy Geithner sit before us and testify in a small business committee and I had an opportunity to query him, when you open that refrigerator door, the lights don’t come on, so I really think he should move on . . . I don’t think that Timothy Geithner really has a handle on the fiscal situation here in the United States of America.”

Steve Doocy was amused by West’s colorful description, and West’s stone-faced delivery of such a humorous line about a refrigerator light only adds to the enjoyment. Overall though, West makes it clear that with such a financial crisis on hand, he really believes everyone in Congress should get back to Washington and start making deeper cuts immediately. And according to West, it would be nice too if “the left” realized “they are the ones that are totally to blame” for the downgrade.