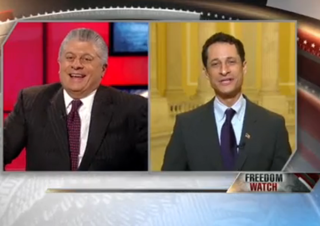 Rep. Anthony Weiner is one of the loudest and most brazen Democrats in Congress. While loud and brazen (some would say shouty) is typically perfect fodder for a show like Freedom Watch, Rep. Weiner faced an uphill battle when appearing on the program earlier this week– he’s a fan of big government, and had the unenviable task of defending certain spending increases in the face of Judge Andrew Napolitano‘s radical libertarianism.

For two people with wildly differing views on government, Rep. Weiner and Judge Napolitano got along like a demanding uncle and a particularly loud-mouthed nephew. Reviewing the comments by President Obama during the State of the Union address, Napolitano did his best to explain to Rep. Weiner that out of control spending would take down the nation, to which the latter replied that a certain amount of research and development is always necessary. As to inflame the judge, Rep. Weiner then used Fox Business as an example of an organization that spends on things that don’t make money for the sake of improvement: “If you ask Rupert Murdoch how are we going to build Fox Business to be a successful programming outlet, they say we’re going to have smart talented people like the Judge… even though we don’t make any money.” The Judge, on his part, tried to swat away the Fox Business comparisons telling Rep. Weiner he didn’t “have to care about Fox Business,” finally scolding him– “Do you have to pick about Fox Business when we’re talking about the president and his tax policies?” Rep. Weiner’s response? “You guys can take it– you’re big boys!”

They next talked about funding for the war in Afghanistan, where they found common ground– the less spending on that, the better– except Rep. Weiner was unsatisfied with the way Judge Napolitano changed the subject, leading to further playful bickering. “Why don’t I describe what I’m favor of and you describe what you’re in favor of and we find common ground?” he asked, to which the Judge replied, tongue-in-cheek, “except I’m the host, and you’re the guest,” later calling him a “wise guy” for once again jabbing him for the way he conducted the show.

Finally, tired of teasing each other, Judge Napolitano asked Rep. Weiner about his date to the State of the Union, Republican Rep. Peter King, who the Judge accused of falling asleep. “I enjoyed sitting next to Peter King,” Rep. Weiner began, “…well, I tolerated it for a few hours. I look forward to not doing that again.”