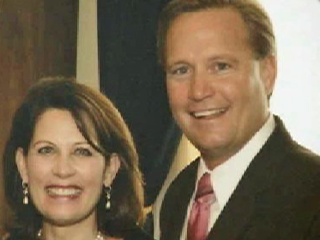 Imagine being a hotshot local news weatherman, accustomed to the boons of local celebrity– handshakes down the street, fan mail, the occasional request for an autograph– unique in your circle of family and friends. Then almost overnight, your older sister develops a following that positions her as a viable candidate for most powerful person in the world. That is what happened to KCTV5’s Gary Amble, who accepted to be interviewed by his peers on his sister, Rep. Michele Bachmann‘s, presidential bid.

“Did you know of your weatherman’s close association with possible political greatness?” KCTV anchor Brad Stephens narrated over footage of their colleague, who seemed genuinely surprised to see his sister taking up such a large chunk of the national spotlight. “My son saw it first,” he said of the news that she was running, “and my neighbors all called me.” He admits “she’s never been really a quiet person,” but he was still somewhat unprepared for the idea of being known for having a famous sibling. “The weirdest thing is pretty much most of my adult life I would run into people and they would know who I am. Now I run into people and they say, ‘Hey, I know your sister.’ That is what is kind of weird,” he admits.

Then there’s the whole politics thing, which he notes means he is receiving a type of scrutiny weathermen rarely experience. “What I’m hoping is that when people watch the weather,” he says, “they don’t automatically assume because Michele is my sister that that either makes me a good guy or makes me a bad guy, because I’m just a weather guy,” he shrugged. He also notes the political attacks on his sister make him feel “defensive”– “that’s my sister, knock it off”– but that he understands the way the game works.

One thing Amble notes that he’s particularly happy to avoid with his brand of fame? SNL sketches. “She thinks it’s really funny and thinks they do a great job,” he notes, but that doesn’t make the idea of being spoof on such a venue more appealing to him. “That’s something that’s never happened to me, thankfully.”

KCTV’s report on Amble and his famous sister below: