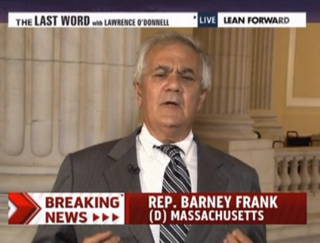 Rep. Barney Frank was one of the few in the House of Representatives to vote against the debt deal slated to become law tomorrow, and as a liberal found it difficult to believe, he explained today, how conservatives had finagled a bill with no tax hikes in it. On The Last Word today, he told host Lawrence O’Donnell that negotiating the bill felt like saving the baby in the King Solomon fable, and that many Republicans’ “craziness” could be explained by “pure ignorance” and misunderstanding of government.

The King Solomon analogy Rep. Frank borrowed from Vice President Joe Biden, who called the government the baby and Republicans the mother that wanted to saw it in half. “We are the parent of the notion that we can come together as a civilized people and do things,” Rep. Frank asserted, “put out fires and build highways and educate children and succor the very poor.” He continued, describing Republicans as wanting “to cut the baby in half,” and noting that they “had a little bit of an advantage,” despite only controlling the House of Representatives.

O’Donnell asked why it could be that they held so much power relative to their size, suggesting that the only explanation “is that Democrats believe Republicans are as crazy as they say they are.” In a word, responded Rep. Frank, “yes.” He then broke down the crazy into two categories: “pure ignorance,” adding that caveat that he voted against the bill in question because “it went too far;” and “others, they don’t understand that the private sector can only do so many things– tax cuts don’t put out fires.” He went on to list several things the government should control, concluding with “you don’t want children running around homeless,” and noting that Republicans “don’t believe in that.”