Rep. Bobby Rush Slams Gingrich Over Chicago Violence: ‘When You Were Speaker, You Didn’t Want To Hear’ About This
VIDEO

Rep. Bobby Rush Slams Gingrich Over Chicago Violence: ‘When You Were Speaker, You Didn’t Want To Hear’ About This 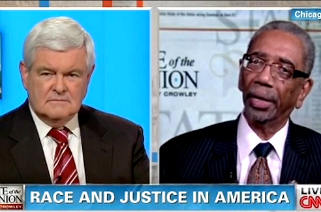 Congressman Bobby Rush had a few things to say to Newt Gingrich on CNN’s State of the Union Sunday morning, after the former speaker chastised him for drawing attention to the Trayvon Martin case by wearing a hoodie on the House floor (thereby breaking decorum) while ignoring the high levels of violence in his home district of Chicago.

Rush thought Gingrich’s criticism was a bit rich, given his memory of the ex-Speaker’s lack of concern for gang violence when they both served together in the House of Representatives.

“That’s a charge, Newt, that doesn’t hold water,” Rush said. “I have been working relentlessly since I’ve been in Congress, even when you were the Speaker of the House and didn’t want to hear these matters.”

Rush also pointed out that the conversation Gingrich claimed nobody was having was in fact occurring as they spoke.

“Chicago will take care of this violence,” Rush said. “That’s one of the reasons why on a Friday, the 26th, we’re having this National Summit on Urban Violence. This was before the verdict, we had planned this. The Congressional Black Caucus is coming into Chicago so that we can work on solutions to this problem.”

“I want to challenge you and your Republican cohorts,” Rush said. “Today is a Sunday. Today is a day of worship. We serve and worship the same god. In Micah 6:3-8, the words tell us that we should love justice, do mercy, and walk humbly with our god. Now, for those folks who are cheering the George Zimmerman verdict, I would challenge you: let us honor, and let us lift up the spirit of the words of Micah 6:8 to work together to have the conversation. But not just have the conversation: let us deal with the disenfranchisement, and let us deal with the distortions as it relates to our nation.”