Rep. Cantor: All Spending Cuts On The Table, Even In Cancer Research 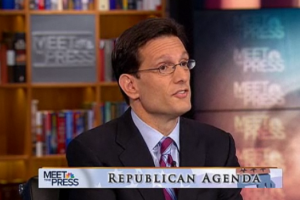 House Majority Leader Eric Cantor appeared on Meet the Press and was grilled by David Gregory regarding his plans for cutting the federal budget. Cantor stressed that every area of the government will be analyzed for potential spending reductions and repeatedly said “every dollar should be on the table.” However, Gregory was less than thrilled with Cantor’s lack of specifics.

Cantor also made it clear that serious spending cuts and reforms will be mandatory before Republicans consider raising the debt ceiling. When Gregory wondered whether cuts in defense spending were being considered, despite Republicans long thinking that such spending is the one area of the budget that could never be too large, Cantor replied “no one can defend the expenditure of every dollar and cent at the Pentagon.” In fact, when Gregory asked about funding for cancer research, Cantor made it clear that no area is safe from potentially being cut.

Though on the issue of entitlement spending, when Gregory, to his credit, repeatedly tried to pin down Cantor on what he actually recommends, Cantor said “we’re for an active discussion to see if we can come together and decide what we’re going to do.” With an exasperated tone, Gregory asked “how long do we need to discuss?” A little less conversation, and a little more action is likely what many Tea Party supporters thought they would get with a new Republican majority, but we will have to wait and see when Cantor is ready to conclude the “active discussion.”

Watch the clip below from NBC: