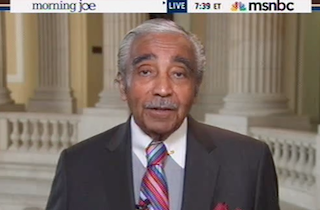 Rep. Charlie Rangel (D-NY) took to MSNBC on Wednesday morning to respond to the frenzy surrounding the Justice Department’s gathering Associated Press phone records. While Rangel rejected the comparison to Richard Nixon, he did critically note that President Obama hasn’t been forthcoming enough about the issue.

Joe Scarborough, for one, had a hard time believing that Obama knew nothing of the what was going on between the AP and the Justice Department. “It just is not credible,” he asserted, “to suggest that the president of the United States knows of a national security issue — that his attorney general says puts American lives at risk — and he just walks away from it and has absolutely no knowledge of it until it breaks a couple of days ago.”

“I don’t think anyone truly believes that the president has given us a sufficient answer for America, much less the press,” Rangel said.

“I think this is just the beginning — and the whole idea of comparing this with Nixon, I really think is just, it doesn’t make much sense. But the president has to come forward and share why he did not alert the press they were going to do this. He has to tell the Americans, including me: What was this national security question? You just can’t raise the flag and expect us just to salute it every time without any reason, and the same thing applies to the IRS.”

Obama needs the chance to examine any wrongdoing, be it negligence or something criminal, Rangel continued. “But, for right now, to say that the president should be doubted?” the congressman asked. “No. He has to come forward and give more of an answer than he has done. He just can’t use national defense as a shield, or use it as a spear, to protect the White House. And we’re not saying that happened.”

Attorney General Eric Holder has said the leak was “very, very serious” and “put the American people at risk.” Meanwhile, he is also set to testify before the House Judiciary Committee about another issue the administration is facing — the IRS scandal.