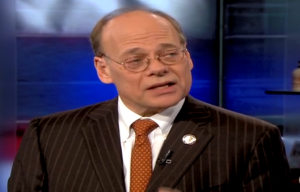 Congressman Steve Cohen is continuing to make the media rounds after his assault on what he alleged to be Republican’s Nazi-like propaganda and their spread of lies about healthcare. In addition to Anderson Cooper challenging Cohen, last night the unapologetic Congressman also spoke with CNN‘s John King and kept the flame on the rhetoric burning high.

Worried that political propaganda from the Republicans was working, Cohen vowed that “if you don’t stand up to lies, they become the truth.” Cohen felt obligated to speak up given that polls show people believe healthcare reform is socialized medicine, includes “death panels” and represents a government takeover, all of which Cohen disputes and at least on the last point, the nonpartisan group Politifact called the biggest lie of the year. While Cohen’s passionate eagerness to stand up for the truth might be admirable, King questions whether injecting Nazi comparisons really makes his argument more effective, especially given the horror that the Nazis caused. Cohen’s response:

“I’m Jewish and I think it’s something that we understand. And how awful it was. And that’s why you need to remind people, that when you have countenance lies, that’s what it can lead to. And countenancing lies here can lead to problems too. But people shouldn’t lie and we should not permit it to go on and on and on.”

Cohen argued he wasn’t saying Republicans are like Nazis and stated “I think the press was hypersensitive,” however he did not back away from alleging similarities in propaganda methods or warning that tolerating lies could lead to problems again. To conclude, King smartly suggested maybe everyone should avoid any type of Nazi comparisons, to which Cohen replied, “certainly didn’t want to, and I don’t think Mel Brooks was being nice to the Nazis either.” King forcefully swatted away this clumsy attempt at humor by informing Cohen, “Mel Brooks was making a comedy movie, there’s a difference from a serious political debate.”