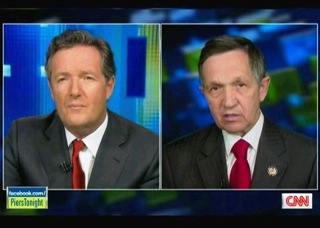 Rep. Dennis Kucinich is no stranger to presidential campaigns, but he may just sit this one out, though he doesn’t necessarily suggest other Democrats do so. Speaking to Piers Morgan tonight, Rep. Kucinich confirmed that his days as a presidential candidate are, for the time being, over. That said, he did support the idea of a Democratic presidential primary in 2012: “I think I would make him a better president.”

Asked whether the election would be “a shoo-in for Obama” if the Tea Party made the Republican Party move too far to the right, Rep. Kucinich answered in the negative, instead arguing that “it’s going to be about the economy,” and that should President Obama fail to turn the economy around, his chances for reelection would drop dramatically. With that in mind, Morgan asked whether he could “see a situation in which anyone challenges President Obama from his own party,” perhaps himself?

As for advice on the economy specifically, Rep. Kucinich advised the President that he would need “Rooseveltian panache” to get through the jobs crisis, and that he believed he was capable of it: “the times call forth from each leader the potential they have, and we all think President Obama has the potential.”