Rep. Duffy: ‘Romney Might Be A Little Stiff,’ But Ann Romney Humanizes Him
Video

Rep. Duffy: ‘Romney Might Be A Little Stiff,’ But Ann Romney Humanizes Him 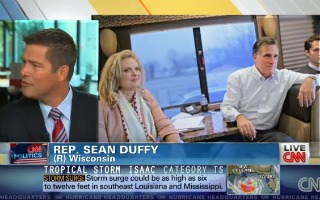 RELATED: Poor Phrasing: Ann Romney Suggests We ‘Unzip’ Her Husband To Prove He’s Not ‘Too Stiff’

When asked about whether Ann Romney can act as a sort of counterbalance to recent polling results showing voters find President Obama more likable than they do Mitt Romney, Duffy replied that “I think when you marry up like I did and Mitt Romney did, your wife says a lot about who you are and I think she humanizes him and brings a different vision of who Mitt Romney is. Some see Mitt as a kind of a stiff guy who is not very relaxed.”

“Do you?” Berman wanted to know.

“Well, he comes across that way sometimes,” said Duffy. “I mean, the ideas are great. But when he’s by Paul Ryan or his wife, he seems to loosen up a little bit. He seems more natural. She’s going to show that side of Mitt Romney tonight.”

“What does it say that this guy has been running for president for five years, he is a still seen as stiff by so many people, by the way, apparently including you?” asked Berman.

“Listen, though he might be a little stiff, I think Americans care about policy,” Duffy responded. “Can this guy lead a recovery? Can he put American back to work? Can he help us get on a trajectory to balance with our debt?”

You might recall that Ann unintentionally caused some giggles (not at the Mediaite offices, obviously) when she made a comment about “unzipping” her husband to prove he is not “too stiff.”