Rep. Elijah Cummings On GSA Scandal: Good That ‘A Democrat Appointee Is The One Who Was The Whistleblower’ 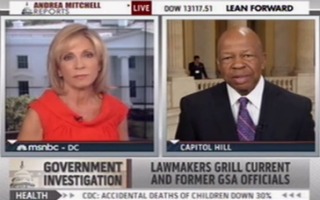 Rep. Elijah Cummings (D-MD), raking member of the House Oversight and Government Reform Committee investigating the recently exposed corruption scandal involving wasteful spending by members of the General Services Administration, appeared on MSNBC’s Andrea Mitchell Reports on Monday where he said it was good that “a Democrat appointee is the one who was the whistleblower.” Cumming’s also praised the Obama administration’s handling of the scandal.

RELATED: This Exists: You Can Buy Your Own GSA Commemorative Coin

“I know you have a lot of government workers in your constituency,” said Mitchell introducing Cummings who represents the Washington D.C. suburbs. “I heard what you said yesterday. To put it bluntly, you said you were pissed off as was everyone on the committee. What were they thinking?”

After telling Mitchell the status of the House investigation into the GSA official’s lavish trips to Las Vegas and New Orleans for conferences, Rep. Cummings waded into the political implications of the scandal. “The good thing, Andrea, is that a Democrat appointee is the one who was the whistleblower with regard to all of this.”

“And I’m so glad it’s come to light because it give us an idea of what may be going on with some of these agencies with regard to conferences,” Cummings continued. He also praised President Obama for appointing an interim head of the GSA to clean up this mess because “it is truly a mess.”

“People are angry at government and that does translate into a ‘throw the bums out’ kind of mentality on election day,” said Andrea. “All of you folks, Republicans and Democrats, are vulnerable when this kind of thing happens.”

“No doubt about it,” said Cummings. “I don’t think this is widespread activity – we’ve got to make sure that it’s not. And wherever we find it we’re going to address it. We made it very clear that you cannot take taxpayer’s dollars and go out and hire mind readers and clowns and paying unfortunately high amounts for rooms for people to go on vacation.”