Rep. Frederica Wilson And Her Hat Make For An Awesome CNBC Appearance 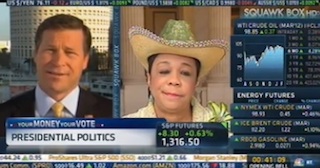 This morning on Squawk Box, Representatives Connie Mack and Frederica Wilson (R and D of Florida, respectively) appeared to discuss their state’s primary and the status of the 2012 race as a whole. Mack, a self admitted Mitt Romney supporter, explained why he thought his candidate of choice was the only one able to get us off “the road to Greece,” while Wilson explained that President Obama was “the education President” and…oh, who gives a crap. None of the viewers watching could hear anything they said over the sound of Wilson’s hat. Seriously, what is up with that hat?

Really, what’s worth watching in this clip is anchor Andrew Ross Sorkin’s reaction to the headware’s glittery awesomeness. For the first half of the interview, you can totally tell what’s going on in his mind. I mean, I’m not psychic, but I imagine his thought process went something like this:

“Whoa. What’s the deal with the hat? I should say something…Eh, I don’t know. I don’t want to insult her…But everyone’s going to be thinking about the hat. I need to say something!…But she’s a Congresswoman. I can’t mock her clothes…Maybe it’s just a Florida thing. Maybe it’s a Florida thing and, if I insult it, Squawk Box will lose all our Florida viewers. We’ve actually been doing pretty well in Florida…Yeah, I won’t mention it…Let’s just go back to the conversation…Now, what were we talking about here?…OK, WHAT THE F**K IS UP WITH THAT F**KING HAT?!?”

Finally, around the three and a half minute mark, Sorkin couldn’t take it any longer, making an awkward joke about Mack needing to get a hat of his own. It wasn’t perfect but at least it deflated some of the hat-related tension. Some of it. That hat was still there. Mocking him. Mocking all of us.

Eventually, the segment ended. “See ya, homeboy!” said Wilson as her sign off (seriously!). She then left, taking the amazing hat with her.

Watch the clip from CNBC below: