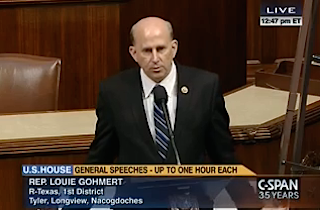 One day after using his time at a hearing on the proposed Comcast-Time Warner Cable merger to defend Glenn Beck, Rep. Louie Gohmert (R-TX) rose on the floor of the House to throw his support behind two men whose HGTV show was canceled because on their anti-gay views.

Gohmert paraphrased the “Christian response” brothers David and Jason Benham gave to their show’s cancelation. “Look, we love homosexuals. We love all people. If you don’t, then you’re not following the teachings of Jesus,” Gohmert said. “But it doesn’t mean that you have to support, embrace, encourage particularly lifestyles that you believe are harmful to the individuals and harmful to society in general.”

The congressman went on to say he finds it “amazing” that “in the name of being tolerant, this fascist intolerance has arisen.” Then he went into his Nazi analogy:

“People that stand up and say, you know, I agree with the majority of Americans, I agree with Moses and Jesus that marriage was a man and a woman, now all of a sudden, people like me are considered haters, hate mongers, evil, which really is exactly what we’ve seen throughout our history as going back to the days of the Nazi takeover in Europe.

What did they do? First, they would call people ‘haters’ and ‘evil’ and build up disdain for those people who held those opinions or religious views or religious heritage. And then the next came, well, those people are so evil and hateful, let’s bring every book that they’ve written or has to do with them and let’s start burning the books, because we can’t tolerate their intolerance.”

RELATED: Hosts of Axed HGTV Show: There’s an Agenda to ‘Silence Men and Women of Faith’

Gohmert said the only reason he stands up for issues like this one is that he hates to see “our Judeo-Christian values, on which our nation was founded demeaned, depicted as somehow evil.” But he maintained that he has no “hate” for individuals.