Rep. Issa On Fast & Furious To Greta: Obama Is Invoking ‘An Executive Privilege That Doesn’t Exist’ 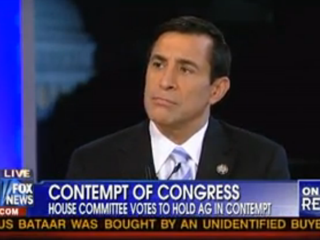 Rep. Darrell Issa, the Chairman of the House Oversight Committee that held Attorney General Eric Holder in contempt today, spoke out about the process and his views on the Fast & Furious scandal to Greta Van Susteren tonight, explaining that he had not yet received many documents and emails required to find out who approved the botched drug war project, nor had he had the question of who authorized the operation answered.

With the President invoking an executive privilege to shield some documents, Rep. Issa said that, as a committee, “we were asked to take some assertion that these documents would be meaningful without seeing them,” adding, “I think they knew we couldn’t accept that.” He thought the President’s attempt to invoke his privilege would not succeed because that privilege “does not exist,” and that, again, many of the documents they have seen are not relevant and the one’s they can’t, they cannot determine.

The answer to whether they have an answer as to who was in charge of the operation was still a flat “no,” and Rep. Issa made clear that “we’ve never thought that this was something directly from the White House, we thought that it was an is a failed strategy done at a local level.” It was the subsequent cover-up that concerned him more than that. “All we had were whistleblowers’ words,” he explained, for a long time, and now with the executive orders, access to documents he thinks could be “embarrassing” was even more limited. Rep. Issa concluded with a hope that a resolution would happen soon, because the resources used here “should be used against waste, fraud, and abuse.”