Rep. Issa To Megyn Kelly On Obama’s Benghazi Response: ‘An Act Of Terror Is Different Than A Terrorist Attack’ 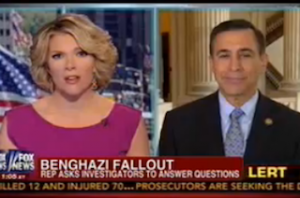 Shortly after President Obama responded to the Benghazi “sideshow” during a joint press conference with British Prime Minister David Cameron this morning, the man leading the investigation gave his reaction to Fox News’ Megyn Kelly. Rep. Darrell Issa (R-CA) began by saying, “only the president could tell us with a straight face there’s never been any confusion.”

“As you go through the facts as they were,” Issa continued, “yes, in real time we knew this was an Al Qaeda-backed terrorist attack and everything else in between is simply revisionist history.” Following the testimony of Gregory Hicks and the other Benghazi “whistleblowers,” Issa challenged President Obama’s assertion that no one in the initial days after the attack knew exactly what had happened. Now that he has more information, Issa called the administration’s response, “just, plain, a cover-up.”

Issa appears to be implying that the words “terrorist attack” connote pre-meditation and advance planning, whereas an “act of terror” could be spontaneous. Was President Obama really trying to make that distinction when he spoke about the Benghazi attack the day after it occurred?