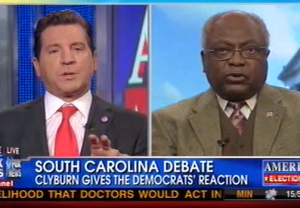 “I understand what Newt is doing,” Rep. Clyburn said. “I always have a problem when anyone denigrates another person.”

Clyburn responded by pointing out that President Obama had inherited the “biggest economic problem” America has had since 1929. “The fact of the matter,” he told Bolling, “is this man inherited an economy that was going into the ditch. You know that, everybody knows that.”

A frustrated Bolling tried to interject as Rep. Clyburn talked over him with analogies of an emergency room patient needing to be stabilized first. Bolling, once Clyburn stopped talking, played a clip from an earlier Clyburn interview where the Congressman compared Mitt Romney‘s time at Bain Capital to Bernie Madoff‘s Ponzi scheming. “How can you compare one man who stole money from innocent investors to Mr. Romney?” Bolling asked.

“What I said was — and I stand by that emphatically, and I’ll say it again — just because you do something in the name of capitalism doesn’t meant that what you’re doing is the ethical thing to do.”

Clyburn said that he saw a lot of things done in the name of religion, as he was growing up, that weren’t religious. He clarified that when people should have looked into what Madoff was doing, they didn’t, possibly out of fear for being called “envious” of his success — language Romney has recently used.

“Someone should have questioned what Madoff was doing,” Clyburn said. “We can question Mitt Romney and we will.”

Watch a clip of the somewhat contentious interview below, courtesy of Fox News: