Rep. Jason Chaffetz’s Advice For Those Asking To See Romney’s Tax Returns: ‘Get Over It’
Video

Rep. Jason Chaffetz’s Advice For Those Asking To See Romney’s Tax Returns: ‘Get Over It’ 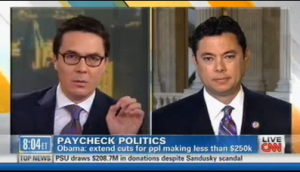 Rep. Jason Chaffetz appeared on CNN’s Starting Point on Tuesday, where he criticized President Barack Obama‘s tax plan, saying that it’s unwise to raise taxes “in times of such uncertainty” and offering his support for Mitt Romney‘s plan to cut taxes for the middle class and — as fill-in host Christine Romans pointed out — cutting the corporate income tax (a measure, she added, on which both Romney and Obama agree). The budget can be balanced, he continued, not by increasing taxes, but by cutting spending, adding that Obama has taken the U.S. from 9 trillion in debt to 16 trillion.

Oh, and speaking of taxes…

RELATED: GOP House Rep To Megyn Kelly: We Could Have Eric Holder Arrested

When panelist Ryan Lizza later asked Chaffetz why he thinks the American people do not need to see the remainder of Romney’s tax returns, Chaffetz responded that Romney has “released everything that is required to be released, including paying more than 16 percent of his income to charitable givings. So I think it’s a diversionary tactic. Most people don’t care about this. Governor Romney has been very successful. Get over it. It’s a reality. He’s been successful. That’s the kind of guy I want to be president. He actually knows how to turn the economy around.”

“He is doing everything that’s required by law,” Chaffetz replied. “He’s had these things in blind trust for a number of years. He was governor for four years. He is one of the most well vetted people out there, and he has done everything required as possible.”