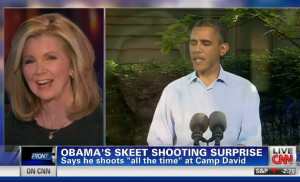 With President Obama recently mentioning that he goes skeet shooting, Rep. Marsha Blackburn (R-TN) challenged him to a contest. And predicted he’d lose.

Blackburn spoke to CNN’s Erin Burnett on Monday night, alongside contributor Roland Martin. While some have been skeptical of Obama’s saying he goes skeet shooting at Camp David, Martin said he’d had enough of people questioning everything from Obama’s religion and race, to his hobbies. This specifically doesn’t matter, he argued.

Au contraire, Blackburn said it was relevant. Asked if he has ever fired a gun, Obama told The New Republic, “Yes, in fact, up at Camp David, we do skeet shooting all the time.”

“If he is a skeet shooter, why have we not heard of this?” she asked. “Why have we not seen photos? Why has he not referenced it at any point in time as we have had this gun debate that is ongoing? You would have thought it would have been a point of reference.”

She went on to offer the president an invitation. “I’ll tell you what I do think,” Blackburn said. “I think he should invite me to Camp David, and I’ll go skeet shooting with him, and I bet I’ll beat him.”

Martin quipped that he’s yet to be able to play golf with the president — and Blackburn again said she’d welcome the chance. “It’s a great hobby, and I would hope that the president does enjoy it,” she said.