Rep. Michele Bachmann, Campaigning In Iowa, Dodges Question On Whether She Will Run In 2012 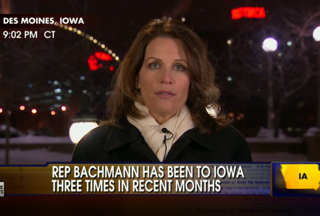 What is Rep. Michele Bachmann doing in Iowa this week? The Minnesota Republican is out on the trail to engage in grassroots work looking forward to 2012, and while she insists she is there to “lay the table” for the Republican 2012 candidates, Greta Van Susteren couldn’t help but be suspicious of her motives. Does Bachmann want to run for President herself? No one quite knows the answer, as Bachmann adeptly dodged the question.

Not many 2012 speculators would put Bachmann on the shortest of short lists for the Republican nomination, given her polarizing nature and the fact that, given her brand, she would have to contend with taking down pal Sarah Palin. Bachmann herself seemed to deflect attention from that possibility, telling Van Susteren that she was in Iowa to “lay the table and frame the big issues,” not for “personal ambition.” She noted that much of her family was from Iowa and she loved the place, and as a caucus state she considered grassroots work there more important. “You’re also testing the waters,” Van Susteren replied, a comment which Bachmann replied to by noting that “so much is at stake” that the work must begin early.

Then Van Susteren asked Bachmann the toughest question head-on: “Would you like to be the one to replace President Obama?” “That’s not why I’m here,” Bachmann replied by way of changing topics, though Van Susteren didn’t let her go that easy, and once again repeated the question. “Yes,” Bachmann replied, “I would like to see him replaced and Iowans will decide who that person will be to replace him. I trust them; they’re good people and I trust their good judgment.”

Van Susteren didn’t pursue the issue further despite the semi-answer, and shifted gears instead to talk about the state of the Tea Party (Bachmann finds it strong). With so few candidates coming out of the woodwork this early in the game (Herman Cain and Rudy Giuliani being the closest to confirmed candidates in the race so far), it would make sense that Bachmann would keep mum. On the other hand, she can’t keep dodging the question for too long if she intends on touring the most important primary states this early.