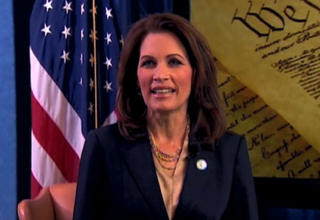 Rep. Michele Bachmann seemed to think she was in Massachusetts today as she delivered a speech to a group of conservatives in New Hampshire today. “You’re the state where the show was heard around the world in Lexington and Concord,” she told the crowd incorrectly, later making references to Plymouth Rock and calling New Hampshire the “first in the nation state.”

New Hampshire is, of course, the first nation to host a primary in 2012, making it particularly important to campaign and promote parties in (though not, as Rep. Bachmann called it, the first state). That appeared to be Rep. Bachmann’s goal in speaking to the Republican Liberty Caucus of New Hampshire today, which, keeping with the founding theme, handed out copies of the Constitution and the Declaration of Independence. Rep. Bachmann kept to the theme, too, except attributed to the state she was in qualities of neighboring Massachusetts:

“What I love about New Hampshire and what we have in common is our extreme love for liberty,” the potential GOP presidential candidate said. “You’re the state where the shot was heard around the world in Lexington and Concord. And you put a marker in the ground and paid with the blood of your ancestors the very first price that had to be paid to make this the most magnificent nation that has ever arisen in the annals of man in 5,000 years of recorded history.”

Later, she told the crowd that New Hampshire had a responsibility to keep liberty alive, which they have done “very well for almost 20 generations from the time the Pilgrims landed at Plymouth Rock, and I’m sure the very first one came up to New Hampshire and said, ‘This is where I want to be.'”

Watch the clip from WMUR, New Hampshire below: