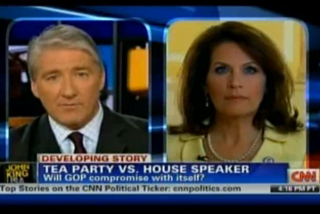 With the government shutdown looming and Republicans looking increasingly obstinate before it, Rep. Michele Bachmann, typically one of the more extreme among them, has staked her place squarely against it. In an interview with CNN’s John King tonight, Rep. Bachmann reiterated her promise to donate money to the troops should their salaries fall victim and pleaded with her colleagues to avoid the worst case scenario.

King opened up the interview by asking Rep. Bachmann whether, as many have speculated, it is the Tea Party caucus that has Rep. John Boehner and the Republican leadership “in a straitjacket” over spending. “The House Republicans have bent over backwards to assure there is not a government shutdown,” Rep. Bachmann argued, then focusing on the individual issues at stake when discussing a shutdown rather than the proposition itself: “I think that we should have a clean bill that makes sure that the paychecks get to the troops on time” separate from the budget bill.

While she did not directly make any defiant statements towards the Republican leadership, her emphasis on moving away from a shutdown rang slightly awry from the rhetoric of many conservative pundits who have no real stake in a government shutdown, like Fox News’ Sarah Palin, who repeatedly tweeted in favor of a government shutdown today. For most of the interview she kept the message on the future of the military, as troops would be the first to see their salaries halted. Confirming her Twitter statement earlier today that she would donate her salary to a military nonprofit should a shutdown occur, Rep. Bachmann noted that, to her, “it’s imperative that our troops not pay a price,” particularly in light of America’s latest military action in Libya. Instead, she argued, “we need to have the fight on Obamacare.” So no, this is not a sign that Rep. Bachmann has gone “soft”– she still very much opposes Obamacare and called it a central issue in the 2012 elections, adding that defunding that health care program would be an easy fix on the path to stabilizing the budget.

The result of her statements is that they, for the first time, starkly distinguish Rep. Bachmann from the Republican establishment on her terms and not theirs. While those in charge of the Republican Party have repeatedly acted to distance themselves from Rep. Bachmann– as King notes, she was not given a Congressional leadership position after last November’s elections and has not been allowed to speak for the party in any capacity despite founding the Tea Party Caucus– Rep. Bachmann has defined her position as static while the party flashes past her to the right. Her comments to King– namely, that she believed the shutdown counterproductive and of negative value to the future of the GOP– establish her as a moderate voice among her party. “Moderate” is a label few have ever placed upon Rep. Bachmann, and certainly among the current Republican delegation to Congress she has stood out as one of the more outspoken conservative stalwarts. Yet if the rumblings of her presidential ambitions are correct, taking a stand against the government shutdown puts her to the left of many in the 2012 GOP field, including but not limited to the aforementioned Palin, Donald Trump, and Tim Pawlenty and, given the median voter theory, the middle is not a bad place to start the race at.