Rep. Nancy Pelosi To Ed Schultz: Today’s Ruling A Victory ‘For Health Care As A Right, Not A Privilege’
video

Rep. Nancy Pelosi To Ed Schultz: Today’s Ruling A Victory ‘For Health Care As A Right, Not A Privilege’ 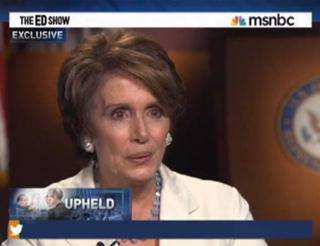 While Bill O’Reilly and Laura Ingraham were heralding the end of health care as we know it, over on MSNBC Rep. Nancy Pelosi was taking a bit of a victory lap with Ed Schultz, praising the Supreme Court for upholding the decision and calling the Republicans’ actions against it “contemptible.”

Rep. Pelosi described the victory as one for the belief in “health care for all Americans as a right, not a privilege,” and that those who are already benefiting from the provisions already in place are thankful for the legislation. She thought it would be very difficult for Mitt Romney to run against the mandate. “Listening to Mitt Romney today, I was confused,” she argued, “he was for it before he was against it, now he is both.” She also attacked those who claimed that it was not cost-efficient, arguing that those claiming so were “a good combination of the health insurance industry and the anti-government ideologues who go out there and fight against this bill. What they want is the insurance companies had a good gig.” She did, however, have good words for Chris Justice Roberts as “consistent” and admitted she was expecting to win over Justice Anthony Kennedy, as well.

Rep. Pelosi thought the issue would not be at the core of the election, however, instead saying “these elections are always about jobs,” and arguing it “creates 4 million jobs, reduces the deficit, it lowers the cost of individuals, it improves the quality and it expands coverage.” Rep. Pelosi also told Schultz an important moment of the day was talking to Vicky Kennedy about Sen. Ted Kennedy‘s work, and had some words for the Republicans that opposed this bill.