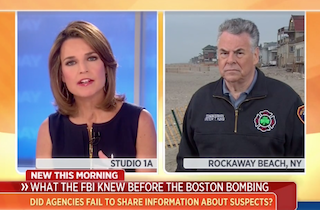 Peter King, a Republican congressman from New York, has been outspoken since the Boston Marathon bombing, be it about increased surveillance of the Muslim community or how authorities handled Russia’s warnings about the suspects. On Monday, King paid a visit to Today — to speak about Hurricane Sandy recovery, but also addressed the Boston investigation.

Had the Russians given the FBI information about the suspect and his mother’s radicalization and views, officials obviously would have gotten to the bottom of the situation quicker. King, though, was wary of the relationship between the U.S. and Russia.

“It’s a bit of a dance,” he noted. “They want to give as much as they can…but they don’t want to give us anything which would give us an idea as to how they do their intelligence.”

The FBI should have looked closer and noted closed out the case so quickly when they were warned, he added — because there may not have been a fire, but there was “enough smoke” to keep the investigation active.

The congressman further refuted the idea that the Tsarnaev brothers were lone actors who executed the attack. “I have no evidence of it,” he conceded, “but when you find this many bombs put together so well…it’s very difficult for me to believe two people could have done that on their own, especially living in a tiny apartment with his wife and daughter and the other brother going to school.”

“Too much was perfectly synchronized here, for this just to be two guys doing it on their own,” King argued. “There had to be some sort of facilitation, at least, possibly co-conspirators.”