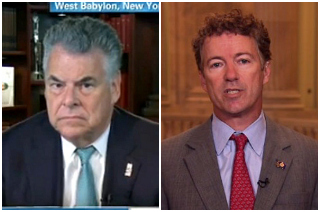 Congressman Peter King appeared on CNN’s State of the Union on Sunday morning and warned that Senator Rand Paul’s “isolationist streak” will destroy the GOP in much the same way the anti-war movement crippled the Democrats in the 1970s and 80s.

“To me the overriding concern here has to be national defense, national security, and not be apologizing for America,” King said. “When you have Rand Paul actually comparing [Edward] Snowden to Martin Luther King, Jr., or Henry David Thoreau, this is madness. This is the anti-war left wing Democrats of the 1960s that nominated George McGovern and destroyed their party for almost twenty years. I don’t want that happening to our party.”

King, a vocal proponent of robust national security measures, was revved up over this week’s vote on an amendment to defund the NSA surveillance program.

“I thought it was absolutely disgraceful that so many Republicans voted to defund the NSA program, which has done so much to protect our country,” King said. “This is an isolationist streak that is in our party. It goes totally against the party of Eisenhower, Reagan, Bush. We are party of national defense, we’re a party who did so much to protect the country over the last few years.”

Host Candy Crowley asked King if he thought the divide between the neo-conservatives and the newly-resurgent libertarian wing led by Paul signalled a serious schism in the GOP.

“I want the Republican Party to be the party of strong national defense, and a party, for instance, which can reach out to labor unions, such as construction unions, police officers, firefighters,” King said. “These are people who are socially conservative and want to agree with us, and too many people in our party drive them away.”