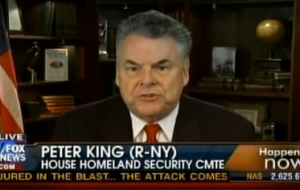 New York Congressman Peter King believes the Obama Administration has a “liberal ideological bias” that keeps them from protecting the nation by going after the people who do it harm–like The New York Times.

Talking today on Fox News, King said the first priority is to go after WikiLeaks founder Julian Assange. But after that, King said he’d urge prosecution of the Times.

LEE: Some people look at Julian Assange as a freedom fighter, somebody that’s providing information so people have a way to hold governments accountable. Others describe him as a cyber terrorist. He got this information illegally and he put it out there, but other news organizations like The New York Times, like The Guardian and several other major newspapers around the world have published it as well–some of it in edited versions, but they did publish this stolen information. How do you go after him and not go after them?

KING: Well, in my mind we should go after both. Let’s go after Assange first, but I called four years ago for prosecution of The New York Times when they disclosed the SWIFT program, which was absolutely essential to America’s anti-terrorist efforts. It caused great harm to the war against terrorism, yet The New York Times went ahead and put it on the front page, was totally irresponsible. Same what they did with FISA, and you know going back to the Pentagon Papers case, in that case I believe five of the judges said even though you cannot stop a newspaper from publishing this material, there’s no reason they cannot be prosecuted for violating the Espionage Act. Justice White in particular said he would’ve had no problem at all prosecuting The New York Times. There is a difference between prior restraint and actual prosecution. Again, I think The New York Times acted disgracefully, irresponsibly, and it’s put American lives at risk.

LEE: And some would say they operated in a way that was good journalism and freedom of the press.