Rep. Peter King on House GOP: ‘I Honestly Don’t Know What They Want’ 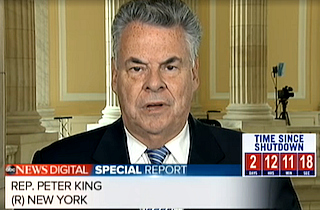 Representative Peter King (R-NY) told ABC News Thursday afternoon that he had no idea what his fellow Republicans wanted from the budget negotiation stand-off that had shut down the federal government, and that a team of moderate Republicans would have to force action to end the stalemate.

“I honestly don’t know what they want,” King said. “Started off by saying they wanted to defund ObamaCare, now they realize that can’t be done. It’s sort of a moving target.”

King said there was at least twenty-five legislators who would vote for a so-called “clean continuing resolution”—more than enough for it to pass the House—but that Speaker John Boehner was handcuffed by what King called “Cruz Republicans.”

RELATED: GOP Rep.: ‘We Have to Get Something Out of This, I Don’t Know What That Even Is’

“We just can’t wait for this to be put on the floor by the speaker,” King said. “We’re going to have to force the action. In some ways maybe that makes the speaker’s job easier. If twenty or twenty-five of us say we’re going to vote no on everything until a continuing resolution is put on the floor, that’s how you get results.”

King said his colleagues agreed with him “that this is insane, that this has to end, but some of them are reluctant to force the action right now. I think we have to force the action. The only difference is a question of timing, that’s all. We all believe it’s absolutely wrong, what’s happening.”