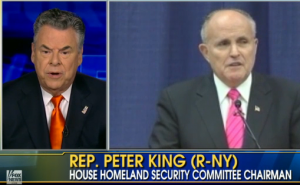 Republican Congressman Peter King appeared on Fox & Friends and very heavily talked up the prospect that former presidential candidate Rudy Giuliani was going to enter the race for the Republican presidential nomination. The fact that Rudy would run again often seemed like a far-fetched rumor, but with the Republicans apparently eager for someone to add excitement to their primary contest, this could explain why King says “as of this moment [Rudy’s] very much inclined to run.”

King explains that “as of now he very much wants to run and this time he would focus on New Hampshire.” Suggesting that no current Republican candidate really demonstrates an expertise in national security, King advocates that Rudy would be a formidable opponent. Plus his proven record of cutting spending and cutting taxes should be appealing to the Tea Party.

Last time around, King admits Rudy had some trouble, but argues that was because “nobody let Rudy be Rudy” and all his advisors were more concerned with helping Rudy avoid controversy rather than letting him be his “tough” self. And to keep the presidential speculation going, even though King believes Rudy is “very close to running now,” he warns that if Rudy doesn’t jump in, he’s not ruling out the possibility that he himself might run for President. Therefore, it seems like Mitt Romney or anyone else in the race shouldn’t get too comfortable yet, because Rudy or King could still shake it up.