Rep. Peter King Tells Megyn Kelly: ‘These Plots Are A Test Of Our Defense System’ 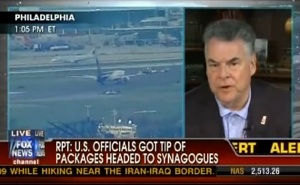 During an interview on America Live, ranking member of the House Homeland Security Committee, Rep. Peter King (R-NY) told host Megyn Kelly that the current UPS Bomb scare story is the sort of plot that is “a test of our defense system” and “this is for real” “whether or not it’s a test.” Additionally, he said, “there is something happening here which has been taken very seriously.”

King spoke rather candidly about the gravity of the threat. Below are excerpts of the

On if these suspicious packages and plots are just a “test run”:

“If these are mockups, if they are phonies, then obviously I would say this has to be a test. They want to test our defenses, maybe they just want to scare us. I would say in this case that it probably is a test of our defense system so they can adapt for a future attack. As far as what you’re seeing now in Baltimore, we saw in Newark and Philadelphia, New York, Philadelphia — there is a large scale operation going on here by TSA and the FBI so, yes, we may see a number of them coming back saying that its negative, others that may turn out to be positive.”

“So as far as a lot of the details, I think the story may be changing during the day. I think there are some, you know, quick conclusions being made. And the fact is, I think, overall, this is for real. And whether or not it’s a test, whether or not explosives were intended to go off, whatever, the fact is there — there is something happening here which has been taken very seriously.”

On the suspicious packages and their origins:

“There is a profile that’s being looked here for — looked for as far as the types of packages, types of cargo, the country it’s coming from, planes it might be on, that type of thing. We know what we’re looking for and that’s why you’re seeing a number of these inspections being carried out. Some of them may end up being nothing. Others may, again, end up being something. So what we’re seeing here is a smaller part of a larger operation that’s going on right now.”