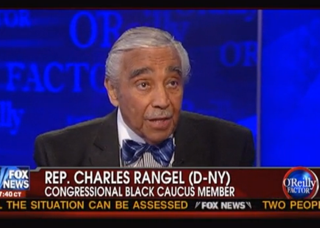 As far as hyper-partisan members of Congress go, Rep. Charlie Rangel is one of the most accessible to programs where he’d be ideologically outnumbered, and tonight he visited The O’Reilly Factor as he has many times before. But tonight he was up against Laura Ingraham, who he repeatedly accused of giving him time to answer and, exasperatedly, quipped, “Bill O’Reilly told me he had a secret weapon– I didn’t know it was just a pretty girl.”

Rep. Rangel was on the program to address comments made the night before by Rep. Allen West, who compared himself to Harriet Tubman and accused members of the Congressional Black Caucus of being complicit in running “the plantation.” Rep. Rangel noted that he was “very surprised” at the words, even allowing that Rep. West “is new and he’s a freshman,” but “he doesn’t come from the political party that can talk about plantations and that type of thing.” Ingraham immediately jumped on the comment, asking if, “Allen West, as an African-American, cannot use the word ‘plantation.'” That begot a vicious cycle of crosstalk that didn’t allow for much in the way of discussion, though Ingraham brought up 1960s Democratic programs and such until the conversation settled down, as Rep. Rangel argued he couldn’t get a word in.

“What has President Obama done for the black community in two and a half years?” Ingraham asked plainly, which received the exasperated answer “you haven’t asked that!” before Ingraham just threw her hands up and said, “let’s start over.” Asking whether the President had done well for the impoverished, Rep. Rangel said “heck no, because Republicans made up their minds” to obstruct and accused Ingraham of giving “mini-speeches” rather than questions. He later tried to argue the President had inherited a mess, and, giving up, told Ingraham, “Bill O’Reilly told me he had a secret weapon– I didn’t know it was just a pretty girl that they’d bring in!” Ingraham took the expected offense (with a hint of amusement) at the comment, though after yet more crosstalk where Rep. Rangel argued “Obama hasn’t restored” the dreams of Americans who are jobless and desperate, he did apologize.

In one of the more bizarre conclusions to an interview recently, Rep. Rangel sheepishly said, “I’m sorry I said you were attractive,” to which Ingraham chuckled, “that’s okay, I was going to make a joke about your condo in the Dominican Republican and I didn’t, out of respect for you.”

The heated exchange via Fox News below: