Rep. Rangel: Dems Didn’t Pass Budget In 2010 Because ‘It Was A Hot Potato’ 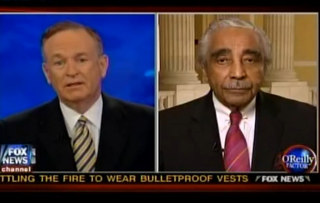 With the government on the verge of shutting down, many are wondering how the nation will run if Congress refuses to compromise on the budget. For Bill O’Reilly, the bigger issue appeared why the budget is an issue now anyway, given the typical budget determinations at the end of the year. Asking Rep. Charlie Rangel, O’Reilly got an admission that the budget was a “hot potato” and a lengthy condemnation of Congressmen who think they can “slash and burn” through the national budget.

“I have a series of very, very foolish questions,” O’Reilly began his segment, eliciting a smile from the colorful (today, magenta and yellow) Rep. Rangel. The first question had nothing to do with the current budget issue, and Rep. Rangel made it clear he intended to distinguish it from the current crisis: “you guys [the Democrats] had the majority– why didn’t you do it?” O’Reilly added that, with the majority, the budget could have included many of the programs in contention today, including Planned Parenthood and NPR. “We didn’t get to it,” Rep. Rangel said earnestly. “We didn’t do it. It was a political hot potato, but that has nothing to do with where we are today.” Pressed further by O’Reilly, Rep. Rangel added that, not only was the budget a “political hot potato,” but “there was no uproar in November about whether or not we passed the budget” and that the legal budget “was merely a guideline,” anyway.

Rep. Rangel than took a shot at answering why the budget crisis was happening today and, for the most part, appeared to blame inexperienced new legislators. “There are a lot of people down here that really don’t understand the process,” he noted, adding later that “you can’t say it’s either my way or the highway.” O’Reilly agreed that he saw the problem with that perspective, but that there was a lot of waste in government. Distinguishing health care from NPR or Planned Parenthood, O’Reilly retorted that, with these programs, “nobody’s life is at stake.” When Rep. Rangel added to the list environmental legislation, O’Reilly hollered “Environmental programs are what? Trying to get climate control money? God controls the climate, come on!”

While this debate, as well as the one going on in Congress, ended at a stalemate, the pair were satisfied with their debate and agreed to disagree on the budget.